This is a duck soup with two stories behind it, not one.

The first has been a long time coming. I live in Northern California, and hunt ducks and geese in the Sacramento Valley, where we grow more rice than anywhere else but Arkansas — another excellent duck hunting state, and no, that is not a coincidence.

Hunting flooded rice fields is one of the main ways we chase these birds, and many is the day I stare at rice grains still on a stray plant, drying in the winter sun, while I am waiting for a wigeon or pintail or teal to fly by.

And no matter whether you are in the rice or in a natural marsh, you will be surrounded by wild mustards of various species. Every year, as the season closes at the end of January, the marshes and orchards explode with a canary carpet of mustard blooms. And, you should know, those mustard greens are the same variety you buy in the supermarket.

Interspersed among the mustards, hiding in wetter places, is the invasive three-cornered leek, a wild onion you should learn to identify, as it is as tasty as it is environmentally friendly to pick.

After a good rain, underfoot grow masses of meadow mushrooms, our local cousin to the plain ole’ button mushroom you buy in the store. Whenever I find them, I pick them.

For many years, I’ve wanted to put all these ingredients together, along with wild duck, to make a dish that celebrates duck hunting where I live. But it took the carcasses of a fat canvasback and pintail to make it happen.

I don’t leave too many of my ducks whole these days. I prefer to cook legs and wings slow and low, and breasts hot and fast. But when I do keep my waterfowl whole, it is mostly to smoke them over fruit woods. I love my recipe for smoked duck, but the fact is the legs and wings are often too tough to eat without further cooking if you smoke the breasts to perfection. What to do?

Make this soup. I used the meaty carcasses of two fine ducks, with the legs and wings still attached (I used the breasts for another dish) to make a clear broth, and then I shredded the meat remaining on the bones for this soup. Added to that are roasted button mushrooms and foraged green onions and mustard; actually in the picture I used sea rocket, a maritime cousin of arugula that works just as well.

The result was worth the wait.

Rice cooked in the broth, nicely roasted mushrooms, the peppery bite of the mustard, a little gentle onion-ness from the chives, and above all the slightly salty, smoky broth and duck meat. A squeeze of lemon juice from a backyard lemon tree tied the duck soup all together.

It is both the perfect use for leftover roasted or smoked duck and a lovely hat tip to our NorCal duck hunting grounds. I couldn’t be happier with this recipe. 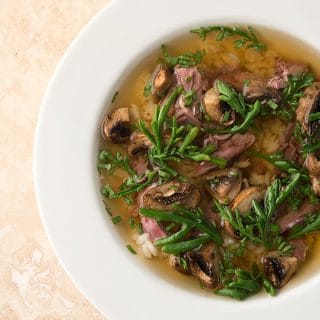 There's a certain jazz involved with this soup. I use rice, but any grain you'd like to eat will do. Only be sure to cook the grain separately in the broth -- if you cook it in the soup, the grains will turn the pretty clear broth cloudy. Button mushrooms are easy to get and are very close to the mushrooms that grow in our duck hunting grounds, but any mushroom will do. I roast them in the oven first and then add them to the soup. Doing this will give you a better texture. Finally, you want a pungent green thing. Mustard is my choice, but arugula, watercress or turnip greens are all good alternatives. Finish the dish with a squeeze of lemon juice at the table.
Prep Time3 hrs
Cook Time20 mins
Total Time3 hrs 20 mins
Course: Soup
Cuisine: American
Servings: 6 people
Calories: 293kcal
Author: Hank Shaw

Note that most of the prep time is to make the smoked duck broth.