Everyone loves sausage stuffed jalapeños, and there are many variations on this classic appetizer. I love using the big, mild jalapeños you can buy in the supermarket these days, stuffed with chorizo and melty cheese, served with a light tomato sauce.

Other good pepper alternatives would be poblanos, Anaheims, or the light green chiles güeros, which are often labeled Hungarian wax peppers for some reason. A sweet option would be those “mini sweet peppers” you can buy now. Or, if you want to get really serious, use chiles manzanos from a Mexican market; amazing flavor, but they can be, well, picoso.

I prefer big fat jalapeños because they are big enough to be a nice two or three bites, have thick walls that hold up to roasting, and are spicy but not overly so.

Many sausage stuffed jalapeños recipes skip the step of roasting the peppers to remove the skins. While I won’t come to your house and beat you up if you don’t, roasted, skinless peppers are much more fun to eat. You get that roasted flavor, and, in case you didn’t know, the skins of chiles are not digestible, so this makes things easier on down the line, if you know what I mean…

As for what sausage to use, I prefer Mexican chorizo, homemade, of course. Longaniza is another good option, and whatever you use should be finely ground. You don’t want big clots of sausage in a small pepper. Honestly any sort of sausage will do; use what makes you happy.

You want a melty cheese to bind it all together. I used Oaxaca cheese here because I was in a Mexican mood, but mozzarella or any of those pre-shredded cheeses are all good. Jack and cheddar spring to mind.

That’s all that should be in stuffed jalapeños: sausage and cheese. But that doesn’t mean you don’t have other good things on the plate. In this case, a sprinkling of dried oregano, and a zippy tomato-habanero sauce. If the idea of sausage stuffed jalapeños with a habanero-tomato sauce seems a bit much to you, skip the habanero.

So my recipe calls for roasted jalapeños with the skins and seeds removed. This isn’t terribly hard to do and it really, really makes a better sausage stuffed jalapeño. Carefully removing the seeds, making the pepper a “boat” is just well, better.

But I get it. Sometimes you are in a hurry. If that’s the case, leave the skins on and skip the roasting. And if the idea of playing Operation on jalapeños makes you queasy, simply slice the top third of the jalapeños off to open up the pepper. This is actually what I’d do if I didn’t roast because it keeps the peppers solid before you bake them.

Make more of these than you think you need, as people tend to eat more than they think they will. Oh, and leftovers? Holly and I ate a few stuffed jalapeños in some homemade corn tortillas the following day. Super good! 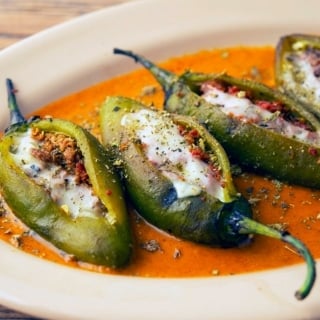 NOTE: You can make the sauce up to a few days beforehand, and you can pre-roast the peppers up to a day before.