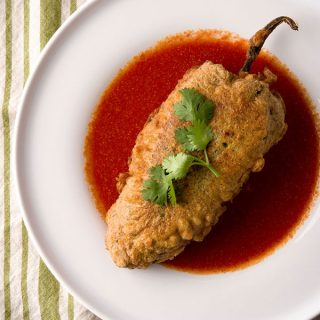 These ain’t the chile poblano rellenos you get at cheapy, corporate Mexican(ish) places all over the country. It’s a real-deal chiles rellenos de picadillo recipe that will knock your socks off. It’s based off an Oaxacan version of the Puebla classic I found in Rick Bayless’ book Authentic Mexican. But instead of a regular picadillo filling, I used dove meat.

You can use any ground meat, to be sure, but there is a story behind this dish. Holly and I were hunting doves on the opener in Yuma, Arizona, that year, and we soon learned that the whole town gets really psyched about the beginning of dove season, to the point where several restaurants will cook your doves for you.

The one we went to was Chretin’s Restaurant & Cantina, and they served us a borderline grotesque version of a popper that had the jalapeno, dove, cheese and bacon entombed in a thick batter. Odd, dirty, yet strangely good for at least a couple bites.

Driving home, Holly and I thought about the place poppers have in dove lore. It’s what you eat on Opening Day, a tradition almost as strong as turkey on Thanksgiving. We were rolling around ideas when Holly noted that chile poblano rellenos are in many ways a lot like a popper, only nicer.

And indeed, this is most definitely not a popper, but it has a lot of the same flavors going on — and I can 100 percent assure you it’s worth the effort to make these. You have the picadillo, which in Oaxaca has almonds and raisins, but which I made more Arizona-centric by substituting local dates and native pine nuts.

Do this if you can find dates and pine nuts, as it’s way better than raisins and almonds. The result is sweet-savory, with lots of texture.

You got your cheese and your chile, too, and I suppose you could add chopped bacon into the poblano to get the full “popper” effect. But I like these chile poblano rellenos as they are. Everything about this dish sings Southwest, which is where it’s at when it comes to dove season. And again, any ground meat works.

Most chile poblano rellenos recipes use a melty cheese, and that’s perfectly fine. And I thought I’d bought one, but as it happens, the cheese only partially melted. It was a happy accident. I liked how the queso para freir held its shape and added texture to the dish.

Don’t mess with the batter, however. It is what you want when you make a relleno: Light, airy, not greasy at all.

No matter where you are, no matter what meat you have lying around, give this a go some weekend. Just make a couple more than you think you need: They’ll get eaten.

I’m not going to lie: Making chile poblano rellenos isn’t a quick process. But nor is it overly difficult. And some of the steps can be done a day or two in advance.

My advice is to make a big batch of the filling — double or triple this recipe — and freeze it in recipe-sized portions. You can’t really roast the poblanos too far in advance or they’ll lose their integrity, but you can do them up to 3 days in advance. If you want a less sweet and more Northern Mexican picadillo, try my recipe for Sonoran picadillo instead. 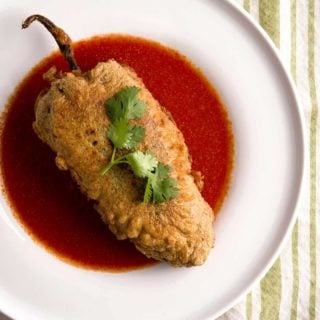 You have options with this recipe. First, chiles. My pick is the poblano, traditional and easily obtainable in most supermarkets. You can use a regular green bell pepper. As for the meat, I used dove because I wanted to make this dish a hat tip to the Desert Southwest, where we were hunting doves. But you can use any meat whatsoever.
Prep Time45 mins
Cook Time30 mins
Total Time1 hr 15 mins
Course: Appetizer, Main Course
Cuisine: Mexican
Servings: 6 people
Calories: 466kcal
Author: Hank Shaw

Serve these by themselves or with Mexican rice, along with lots of cold beer.