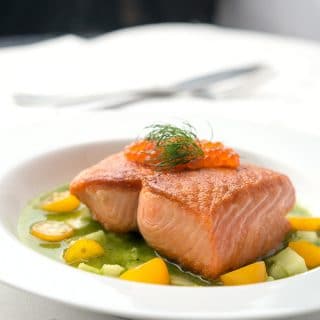 Serving a cucumber sauce for salmon is a classic combination that sometimes gets overlooked, possibly because you see it most in the cooking of Scandinavia and Eastern Europe.

Wherever cucumber goes it cools the food it hangs out with. In the case of salmon, cucumber tames a lot of the richness and punch of good wild fish, which has way more depth of flavor than the farmed Atlantic stuff. This is especially so with kings and sockeyes, which are the most assertive of all salmon.

I got the inspiration for this cucumber sauce for salmon in a great book of Austrian cooking by Chef Kurt Gutenbrunner called Neue Cuisine: The Elegant Tastes of Vienna: Recipes from Cafe Sabarsky, Wallse, and Blaue Gans.

I cook almost exclusively with king salmon because that’s what I catch here in California, but any salmon will work here… even farmed Atlantic.

Gutenbrunner’s original recipe calls for halibut and doesn’t have any tomatoes in it, and his sauce is a bit more complicated. But even slimmed down this is a date-night dish, not a Wednesday night special. That’s not to say it’s overly tough to make, but it does require a couple hours of passive time to let the cucumbers and dill strain slowly.

Incidentally, both of these steps (detailed below) can be done ahead, making the dish come together quickly when everything’s set.

The salmon is simply seared in a hot pan until you get a crispy crust on one side, then served with a delicate onion-cucumber-dill sauce that has chunks of cucumber and little cherry tomatoes in it, and it’s all garnished with white pepper, more dill and salmon caviar.

You don’t strictly need the salmon caviar here, but when the caviar is well made, the flavor is almost identical to chicken egg yolks and that touch really does add something to the overall dish. If you don’t like caviar, go ahead and skip it. If you catch salmon or trout, here’s how to make caviar at home.

And as pretty as the final dish is, it’s even better to eat. You have all sorts of different flavors and textures going on — crunchy crust and then the silky interior of the salmon, a cooling, mellow sauce, the bright zip of the cherry tomatoes, that über-rich salmon caviar. If you make this for guests and they’re not blown away, find new guests.

If you make this in winter with hothouse cucumbers, omit the tomatoes altogether -- better to skip them than use crappy out-of-season tomatoes. I catch a lot of king salmon, so that's what I use. Feel free to use smaller pieces of salmon, or substitute any other sort of salmon, trout or char. Don't like salmon? Try halibut. You do want a thick piece of fish here, though, so just keep that in mind.
Prep Time30 mins
Cook Time20 mins
Total Time50 mins
Course: Main Course
Cuisine: German
Servings: 4 people
Calories: 394kcal
Author: Hank Shaw

I like to eat this with a bracing white wine like a Chenin blanc or a French Sancerre. A German Riesling or an Italian Pinot Grigio would be good, too. For beer, go with a hefeweizen or a good lager.