A classic pike recipe from Scandinavia, these pike balls with a dill-cream sauce are easy to make and get around all those bones. It’s a fun appetizer, or an easy meal. Other fish work well, too, if you don’t have pike.

Readers of this space know that if there’s anything I love more than dumplings, it’s meatballs of all kinds — whether they’re made from meat, fish or shrimp.

These pike balls are similar to my recipe for German fish meatballs, but the flavors are different; I also have recipes for fish balls and shrimp balls from Mexico, which are also very different.

Anyone who cooks pike knows they have lots of bones. Unlike many other fish, pike have “Y” bones running along the top third of their fillets. This can make them difficult to cook. And while I have detailed instructions on how to clean a pike in my cookbook Hook, Line, and Supper, you don’t necessarily need them here.

The reason is because with this pike recipe, you grind the raw meat through a meat grinder. If you don’t have one, you can use a food processor, which, while not as good, will get you close.

Doing this breaks up all those little “Y” bones so you don’t even notice them. Keep in mind that this only works for smallish pike and pickerel. If your pike is larger than, say 30 inches, you might want to cut the extra bones out.

Of course you can make pike balls with any fish, not just pike. Then they’re just fish balls with a dill cream sauce.

About that sauce. Dill cream sauce is a sort of gravy I learned about in Magnus Nilsson’s great book The Nordic Cookbook; this is a great resource if you are into Scandinavian food. It’s basically a roux, stock — ideally fish stock — cream and lots of dill.

Hate dill? Use another fresh herb, like parsley or lovage, fennel or savory or even the leaves from a bunch of celery.

Generally speaking, pike balls would be an appetizer in a larger meal, something akin to a fish version of Swedish meatballs or their larger cousins, Norwegian meatballs.

If you want to go that route, maybe serve them before a salmon soup or nettle soup, and then serve something like duck with beer sauce, or just a simple venison or elk roast.

Or just make your pike balls a meal. The dill cream sauce works well with potatoes or a loaf of crusty bread, so add those and you have a nice meal. I like to have a plate of pickled things on the side to add some tartness to the party.

You can easily make this pike recipe ahead, cook the pike balls, let them cool and freeze, then reheat them in broth or salty water, or even just in the dill cream sauce. The sauce doesn’t keep well, however. 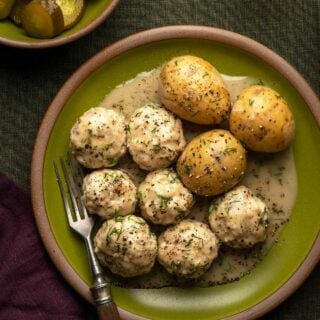 Keep in mind the 8 servings are if these are served as an appetizer. It’s more like 4 servings if you serve them with potatoes or bread as a meal.