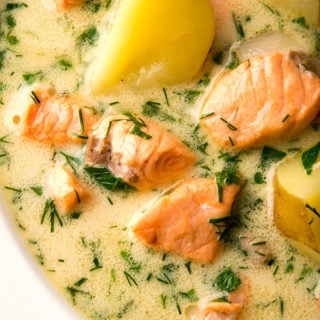 This lovely salmon soup from Iceland is something of a cross between a chowder and a soup, with just a touch of dairy. It’s warming and comforting without being overly heavy, which I like. And what’s more, it can be made quite well with either fillets, or the meat left on the bones of salmon or trout, so you waste less.

by Nanna Rögnvaldardóttir. Similar soups exist throughout Scandinavia, most famously the Finnish Lohikeitto. All use dill, a little dairy, and fresh salmon

Iceland still has good populations of Atlantic salmon, but of course, being in California, I use our local chinook salmon instead. Any kind of salmon or large trout, or several smaller trout, will work for this salmon soup.

Must you make salmon or trout stock to make this salmon soup? No. You can use chicken broth instead, or some other fish or seafood stock. This is actually epic when made with crab or shrimp stock.

But in many cases, you have the carcasses of the fish you caught. Why not use them? I know, most cooks will tell you not to do this because salmon broth will be strongly flavored. But this is a salmon soup, after all, and you’re not storing the broth for more than a couple days, so you won’t get that awful “salmon stink” everyone knows and hates.

I also have a separate recipe for salmon stock, which you can also use if you want.

Sure, you can go buy a fillet of salmon for salmon soup, and that’s perfectly OK. But a better route is to pick off the leftover meat from making your salmon stock, using that for the finished soup.

Meat that is close to the bone is fattier and more tender, and the salmon flaked off bones, and especially in the bellies and collars will make a much, much better salmon soup; cheek and head meat is fantastic, too.

Bulking out the soup are few root vegetables or potatoes — rutabagas are a favorite of mine for this soup — and when they’re done, add a little cream, a few fresh herbs, and you’re good to go.

There is one special ingredient that really makes this salmon soup, however: whey. This tart byproduct of cheesemaking adds the brightness that this soup needs — it’s a common ingredient in Nordic cooking, one I’d love to see more Americans use.

How to get whey? Easy. Buy some milk and make some homemade ricotta cheese. (Here’s how to make ricotta cheese at home) You can then use your ricotta any way you’d like, but I might suggest using it in venison lasagna.

Of course, you can skip the whey if it’s too much trouble. But it does make this soup extra special. A decent substitute would be to whisk in some full-fat sour cream into some broth in a little bowl, then adding that to the salmon soup.

Everything else is easy to find and uncomplicated. This is, actually, something of a chowder — although I have a Pacific Northwest rendition of salmon chowder elsewhere on this site.

You can skip the egg yolk step, but it makes the salmon soup a lot richer.