Mexican fish balls, albondigas de pescado, are a thing all over that country, and versions exist pretty much in every state with a coastline… which is most of them.

These I made from Pacific rockfish (but any fish will do), and are served in a light tomato broth. Great for hot summer suppers, or as an appetizer for a larger seafood feast.

Fish balls, as you might imagine, are meatballs made with fish. They are lighter and springier than red meat meatballs, and you see versions of them all over the world. Asia does a lot of fish balls, and I have a recipe for German fish meatballs, too.

I cobbled my recipe for fish balls together from about a dozen Spanish language cookbooks, plus a couple English language ones, but I leaned most heavily on a recipe in the book Cocina Familiar en el Estado de Baja Sur. It’s not an easy book to find, but there are copies here and there in the US.

Albondigas de pescado are one of the specialties of La Paz, the capital city of Baja Sur, and a place Holly and I love to visit. They are mostly either fried or simmered in a caldo, a light broth. Once you make your fish balls, you can go either route with this recipe.

As you can see in the pictures, these are finely textured fish balls, which is how I like them. They are not fish cakes, and they are made with raw fish that is then cooked, so you get a prettier fish ball that isn’t lumpy — and, more importantly, holds together. I tried making them with flaked, leftover fish and they fell apart.

A word on what fish to make fish balls from. There is no real rule, but in general you want “normal” fish, which is to say your typical white, flaky fish — freshwater or salt. Really firm, steaky fish like tuna or sturgeon aren’t great choices, nor are really oily fish like mackerel or jacks, although mackerel is used a lot for Asian fish balls. I do really like salmon and trout for fish balls.

I cook these by dusting them in flour or masa harina and dropping them into simmering salted water. When they float, give them another minute or so, then move to the sauce. Could you cook them in the broth itself? Sure, but you’d need broth more than you’d use and it would muddy the flavor of the broth.

Your other option is to fry them after dusting in flour or the masa harina. I only do this if I am deep frying because if you shallow fry any sort of meatball, you get this odd ring in the center where it was fried twice — you flip the meatballs, remember — and they tend to get misshapen when you shallow fry.

If you decide to fry your fish balls, drop them into 350°F oil until they are golden brown, roughly 5 minutes.

The poached balls I serve these with a light tomato/chile broth, but you can simply go with any sauce of your choice if you’ve decided to fry them. Garlicky aioli is always a good call, or you can mimic my recipe for salt cod fritters and do a saffron aioli, which is both delicious and pretty.

Once cooked, you can keep fish balls in the fridge for a few days in a covered container, and they can be frozen. 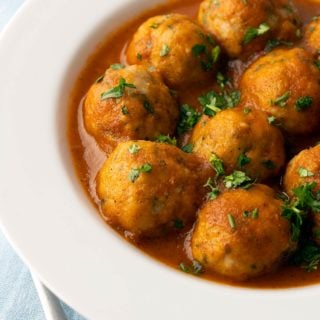 These fish balls can be made with most fish, and can either be deep fried at 350°F until golden brown, or poached in salted water and then served in a light chile-tomato broth.
Prep Time40 mins
Cook Time10 mins
Total Time50 mins
Course: Appetizer, lunch, Main Course, Snack
Cuisine: Mexican
Diet: Low Fat
Servings: 4 servings
Calories: 430kcal
Author: Hank Shaw

Most kinds of freshwater or saltwater fish will work with this recipe.