Mexican cuisine never ceases to amaze me. Take this dish. These meat patties are called pacholas, and they are, in essence, a flattened meatball seared quickly and served with salsa. Brilliant!

I had never heard of these glorious meaty treats until I read my friend Pati Jinich’s new cookbook Treasures of the Mexican Table, which I absolutely recommend. This is not her recipe, but I wanted to let you know where I got my inspiration from.

It turns out that pacholas are common in central Mexico, not the North, where most of my experience lies.

They are most common in the Mexican states of Jalisco, Guanajuato, Michoacán, Queretaro and Zacatecas.

As a side note, I found it odd that I’d never seen them — because so many Mexican immigrants here in Sacramento are from either Jalisco or Michoacán — until I asked my friends about pacholas. They all said that pacholas are something you make at home, often for kids.

They are really easy to make, and definitely kid friendly, I can tell you that. Like I said, they are basically a flattened meatball, and who doesn’t like meatballs? No one, that’s who.

Traditionally, you make pacholas on a metate with a metatil, the grinding stone that comes with the metate. All the ingredients are finely ground together, and, as you do this, the finished mixture starts to slip off the metate in wavelets. When it’s a few wavelets long, you very carefully pull it off the metate and set it on something while you make the rest.

Then you sear your pacholas on a very hot comal. (Check out this awesome video of the old way of doing it.)

I do own a metate and a metatil, but I am not going to walk you through that process. Pati, myself and most other cooks prefer to make our pacholas with a tortilla press. Way easier!

You can also simply put the mixture between two pieces of wax paper or plastic wrap and use a rolling pin (or an empty bottle) to make them.

I use ground venison for my pacholas that has some fat in it. Any ground meat will work, and I suspect — although I have not tried it — that pure ground meat with no fat would also work because there is a grain binder in the mix.

Whatever you use, it needs to be finely ground! Pretty much any store-bought ground meat is fine, but if you are grinding your own, put the meat through something small, like a 4.5 mm die.

If all you have is coarsely ground meat, you will need to pulse it in a food processor with the other ingredients for your pacholas to come together.

Cook your vegetables. Otherwise you’ll get a weird crunchiness in your pacholas you probably won’t like. I char my onions and garlic on a comal to cook them — the blackening adds flavor and softens them.

Use mild chiles. Chiles colorados, a/k/a dried red Hatch chiles, or guajillos, pasillas, or anchos are all excellent choices. In the picture above, I’m using chocolate mirasol, an heirloom variety a lot like a pasilla.

You need a binder. Historically, freshly made masa was the binder, and you can certainly use that. But far more common is to use either breadcrumbs or stale bread, soaked in milk. An egg helps a lot, too.

Serve your pacholas with beans — freshly made or refried — maybe some nice Mexican rice, and a salsa of your choice. I did a pico de gallo and added cotija cheese for the photos, but a simple tomatillo salsa verde or fire-roasted salsa would be great options, as would a salsa morita for a bit of extra heat.

You can also put the patties in a bun to make a Mexican torta sandwich, maybe with a smear of refried beans and some salsa and shredded lettuce.

Or hell, just eat them solo. 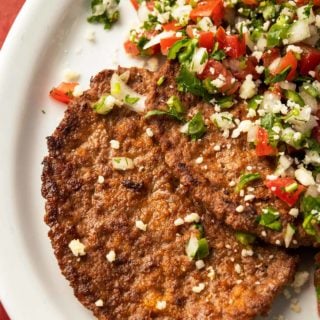 If you don’t have hamburger rolls lying around, you can use 1 cup breadcrumbs or crushed Saltines. If you use the Saltines you won’t need to salt the rest of the mixture.