OK, so I know this post is going to weird some people out.

This lovely recipe you see here I call “Kansas Pheasant.” But the reason isn’t obvious. After all, when you think of Kansas, you think: Home of Dorothy, the Jayhawks (and Wildcats), farmers, Germans and the like.

Not salsa verde and chochoyotes, pepitas, nopales and mezcal.

Walk with me a moment.

I just got back from hunting pheasants with my friend Jim Millensifer out in western Kansas for the annual Kansas Ringneck Classic. I had a blast — I rarely get to actually target ditch chickens, and it was fun to do that. It’d been too long.

Whenever I am hunting, I soak in my surroundings, mentally recording everything around me, like that scene in The Terminator — only I don’t have an internal heads-up display (yet). Culture is indeed part of it: What sort of people are here, what’s the climate, the local crops, etc.

But I also pay close attention to the plants I see around me when I hunt. That’s where the inspiration for this dish came from.

First, Kansas is a huge producer of sunflowers and corn. Those ingredients absolutely needed to be in this dish. How I had no idea, although I was pretty sure sunflower oil would play a role.

I reckoned I could do a dish like Doves And What They Eat, which is simply fried dove breasts with a pilaf of the things doves commonly eat — soybeans, wheat, corn, sunflowers and such. Then I spotted something familiar, but wilted from the cold: wild tomatillos, Physalis longifolia. Called tomatillos de milpa in Spanish, they are the most highly regarded tomatillo for cooking by many Mexican chefs.

I did not expect to see them in chilly Kansas, but there they were. Shortly after I saw the tomatillos, I began seeing Spanish bayonet, a type of yucca.

This is Yucca glauca, and it’s common in the western Great Plains. Some yuccas have edible fruits, and the young flower stalks of this species are quite good pickled. (Fried yucca flowers are excellent, too.) And, well, they’re an agave. Mezcal is made from agave, as is tequila, although not this variety.

Right next to the yuccas were something I’d actively been looking for, since I’d seen it in western Kansas the last time I’d hunted here. Opuntia macrorhiza, the Great Plains prickly pear.

Jim pointed out the ingredient that would seal the deal: Buffalo gourd, Cucurbita foetidissima.

Unlike many wild gourds in the United States, the seeds of this one are readily edible, although the flesh isn’t. My mind kicked into overdrive: tomatillos, agave, prickly pears, gourd seeds. Add this to the omnipresent sunflowers and corn, and the obvious answer was to go Mexican.

I never would have imagined that the landscape of western Kansas would speak Spanish. But the region had been part of the Spanish territories back in the 17th century, and hey, this was going to be a helluva dish. So here it is, a Mexican pheasant recipe:

I have to tell you that if you make this recipe, it’s a bit of a 2.0 sort of recipe, as there are a few more components to it than many of my other recipes, but for this I make no apologies. It’s damn good. Really damn good.

But even if you don’t make Kansas Pheasant, the real point of all this is to pay attention to your surroundings when you want to think up a new dish. Culture, yes, but also crops, weather, what your quarry eats, and, most importantly, the botany of your environment. 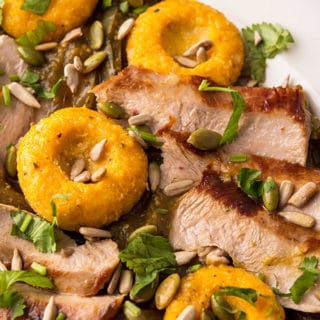 This is a dish where each element isn't hard to do, but there are a few different components. Some can be made in advance. All these ingredients are easily available in Latin markets, although the nopales are seasonal; use a poblano or some other nice green pepper as a substitute. You can of course do this recipe with other meats, and if you want to skip the chochoyotes, use rice, or put all this in a tortilla.
Prep Time30 mins
Cook Time45 mins
Marinating time1 hr 30 mins
Total Time1 hr 15 mins
Course: Main Course
Cuisine: Mexican
Servings: 4 people
Author: Hank Shaw

NOTE: For best results on the dumplings, you want to buy masa for tamales from your supermarket or a Latin market. I make my own masa from corn, but hey, that's hardcore...  NOTE: You will want my salsa verde for this recipe, but you can sub in store bought salsa verde.
Tried this Recipe? Tag me Today!Mention @HuntGatherCook or tag #HankShaw!