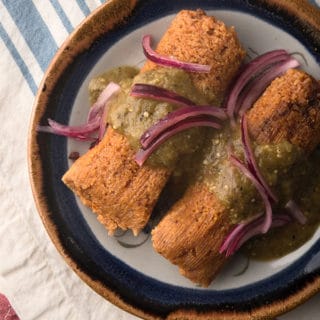 One of the amazing things about researching my latest book, Buck, Buck, Moose, was the discovery that basically every culture around the globe either eats venison, or at least has a history of doing so. Even the Aborigines of Australia hunt kangaroos, and if you’ve ever eaten one, ‘roo tastes a lot like venison.

Mexico is loaded with deer, and there is a rich tradition of Mexican venison recipes dating back to the Maya and Aztecs. This recipe for venison tamales is newer, but it is still an authentic Mexican recipe.

I got this recipe from Patricio and Cinthia Wise, friends of mine from Monterrey, Mexico. These venison tamales are a tradition in their family whenever someone comes home with a deer. They would bring the meat to a lady who specializes in making these tamales, and would often get an entire deer made into them. They are that good.

Keep in mind that there are lots of different kinds of tamales in Mexico. These are from Nuevo Leon, so are tamales norteño, thin tamales wrapped in corn husks. You could of course make yours fatter or wrap them in banana leaves, too.

For those of you who are averse to spicy foods, know that I use mostly guajillo chiles, which are not even as hot as a jalapeno. Any dried chile will work, and if you are really scared of picante foods, use only anchos, which are very mild.

The sauce on top of the tamales is my tomatillo salsa verde, but this easy Mexican tomato sauce works well, too.

Make quite a lot of these when you do, as they are something of a production. But venison tamales freeze very well, and you can pop them right from the freezer into a steamer for an easy weeknight meal. 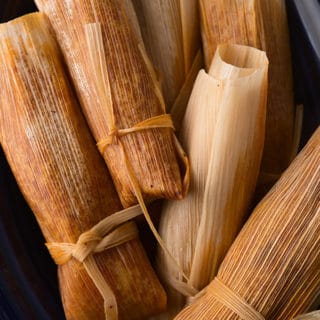 This is a recipe for venison tamales from my friends Patricio and Cinthia, who are from Monterrey, Mexico. They use venison, as do I, but beef, lamb, goat, goose, duck or really any meat will work.
Prep Time2 hrs
Cook Time1 hr
Total Time3 hrs
Course: Main Course
Cuisine: Mexican
Servings: 10 people
Calories: 633kcal
Author: Hank Shaw