Joe was at it again. My friend Joe is a fishaholic, ready to have a go at any and every fishery Northern California has to offer. This winter he’d dialed in a good spot for trout through the ice. Yeah, you heard right: Ice fishing. In California. Yes, that California. More on that later. Anyway, Joe’d scored well up there, even limiting a couple of times.

Now you may have noticed that I don’t talk a lot about trout fishing. There’s a reason for that. I’ve had more than a few run-ins with what I call the Orvis Boys, fancy fly-fishermen with tons of gear and a visceral hatred of guys like me: Bait fishermen who — gasp! — actually eat the trout they catch. That put me off trout pretty well.

So you will be seeing more about trout on this site in the coming months. NorCal is well known for spectacular trout fishing, and, well, I love pan-fried trout.

I happened to be mulling my spring fishing plans when Joe sent me the message about ice fishing. Sure, I said. Why not? I’d never been ice fishing in California. It was settled.

Early one morning a few days ago, Joe arrived at my doorstep bright and early. Into the truck and up into the mountains we went. It is in the mountains where the ice — and the trout — are located.

California is a wondrous place from an outdoorsman’s perspective. Don’t like the climate? Drive a few miles. It was going to be 75°F at my house that day, but were were driving into a different world.

Up and up we went, past Tahoe and higher. Finally we stopped at the shore of Caples Lake, a little lake that sits at 7800 feet above sea level. We got out of the truck and could immediately see our breath. It was cold. I put on my jacket and looked out over the lake. Cold yes, but gorgeous.

High peaks surrounded us and there was almost no sound… except for that of dripping water. Never a good sign when you are headed out onto a frozen lake. Joe hadn’t been to the lake in a week or so, but assured me that the ice would still be thick. We walked up to the bank and saw a small patch of open water. Not good.

“You go first,” I said to Joe. I promised to save his ass if he fell through. Carrying our ice auger, he gingerly took a step onto the ice. So far so good. We decided to drill a hole right near the bank to test the depth of the ice. After drilling 6 inches and still not getting through, we reckoned it’d be fine.

We were right. We walked out onto the frozen lake and soon found a few old ice holes. We cleared them with the auger, revealing that the ice underneath us was nearly two feet thick — after a week of warmth, in late March. I was amazed. We drilled out a few more holes and dropped our jigs down. Good thing the ice was thick, as we were in at least 10 feet of water not 100 feet from shore.

We hadn’t been fishing 15 minutes when Joe got a bite. Up came a teeny tiny mackinaw, probably 6 inches long at most. When they’re that small, macks look snakelike. Joe returned him to the water.

I joked about what sort of stories that mackinaw would tell his friends. “Man, I was totally abducted by aliens! It was so weird.” None of the other fish would believe him, but he would know. He’d been to The Other Side…

Ding, ding. DING!! My rod tip bent and I set the hook with a flick of my wrist. A fish! My first fish through the ice in nearly a decade! As soon as I saw it through the hole I knew it was not a mackinaw. It was a rainbow trout.

“Nice!” Joe was excited. I was a little less so, not knowing how big trout ought to be. Remember I grew up catching ocean fish, so a foot long trout was nothing to write mom about. But Joe assured me this was a decent enough fish, so I bonked him on the head and set him on the ice. At least we would not get skunked!

The sun crested the peaks and in an instant, the air warmed. Jackets came off, then sweaters. Fishing slowed. Joe caught another micro-mackinaw, then so did I.

Hours passed. Staring into a hole for hours can be an exercise in meditation. Mostly it was a mediation on how I was going to cook this little trout I had.

Finally we were down to our t-shirts. The weather had to be close to 70°F, even all the way up here, more than a mile high. We called it a day.

I later learned that quite the ice fishing community exists way up here in the mountains.

And let’s face it: Ice fishing in a t-shirt, through two feet of ice in the High Sierras is just about the coolest way to do it. Beers keep cold in the ice while you catch gorgeous trout — and a tan. California uber alles! 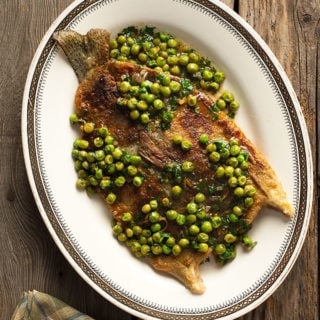 Pan-fried trout, dredged in flour and fried in butter with a little lemon. Few things are better. I start with a butterflied, deboned trout (here are instructions on how to butterfly a trout), fry it only on one side and serve it with peas, parsley and a lemon-butter sauce. If you don't have a butterflied trout handy, fillets or whole fish work fine. I just like the trout-as-schnitzel look of a flattened, boneless fish.
Prep Time15 mins
Cook Time10 mins
Total Time25 mins
Course: Main Course
Cuisine: American
Keyword: fried foods, peas, trout
Servings: 4 people
Calories: 170kcal
Author: Hank Shaw