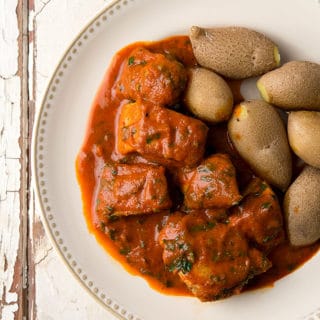 Late summer is tuna time, and it also happens to be the time when all my various peppers are ripe. Combining the two is a no-brainer: Tuna and red peppers are a common combination in Spain.

The origin of this recipe is from the late Penelope Casas’ Delicioso! The Regional Cooking of Spain, which is my go-to cookbook for Spanish food. Casas found the dish in Spain’s Canary Islands, which are known for their tuna fishing, and for their little potatoes. This recipe combines them.

You don’t think about fish when you eat this dish. The tuna, seared hard and simmered until cooked through, takes on a character similar to long-simmered beef — although this recipe barely takes 30 minutes to make.

The sauce is the star, however. It hinges on roasted red peppers and features lots of paprika, garlic and fresh chopped herbs. It is one of my favorite ways to cook tuna, and works really well with all firm, oily fish, from the yellowfin and bigeye down to the little bonito.

Bonito is a term for several related small members of the tuna family, all with very dark meat — it is as burgundy as venison — and is closer in flavor to mackerel than its larger tuna cousins. Bonito are generally unloved in the United States but enjoyed in the Spanish-speaking world. I like them a lot, once you cut out the extremely dark “blood line” that runs down the center of each fillet.

This recipe is easy and fast enough to serve on a weeknight, but if you cut the tuna into nice squares, you can stick a toothpick in each piece and serve them on a tray as a party appetizer. The dish is almost as good at room temperature, which makes things even easier come party time. 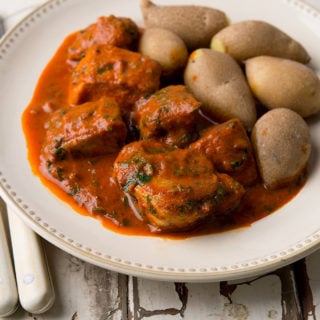 Use any fresh tuna with this recipe, or you could use yellowtail, amberjack, Spanish mackerel or king mackerel. If you are inland, sturgeon, paddlefish or even catfish. Really any firm fish you can cut into squares will work. Serve this roasted fingerling potatoes and a green salad, or with a Spanish style rice.
Prep Time15 mins
Cook Time20 mins
Total Time35 mins
Course: Main Course
Cuisine: Spanish
Servings: 4 people
Calories: 605kcal
Author: Hank Shaw