Turkey tacos are a beautiful thing.

Sure, you can also simmer the legs for turkey carnitas, or crock pot them then coat them in a sauce, like my Yucatecan turkey. Both make great turkey tacos. Or, you do as we do here, and brine and sear turkey breast, then chop it.

Turkeys, you may or may not know, were domesticated by the Maya and Aztecs a few thousand years ago. As a result, Mexican cuisine is loaded with recipes for pavo, or, if you are south Mexico, guajolote. Turkey tacos, oddly, aren’t really a thing there. So this is not an authentic Mexican turkey taco.

Nope, my recipe is a hybrid of American and Mexican influence. Traditionally seared turkey breast, but with jack cheese. Mexican roasted poblanos, but nothing unusual beyond that. Avocado, cilantro, maybe some green onions, that’s it. You could add diced tomato.

I make my own corn tortillas, but you could use whatever tortilla makes you happy, corn or flour, even hard shells. I won’t judge.

I also use a wild turkey here, a Rio Grande I hunted in the nearby Sierra Nevada. You could use any sort of turkey of course, and there is no reason you can’t use a store-bought one. Only thing is you won’t need to brine the store-bought turkey.

To brine a wild turkey breast, cut it into three pieces. You’ll notice a turkey breast is shaped like a teardrop, with a thick end and a thin one. Slice off the entire thin end, which will look like a triangle. The remaining breast will be thick. Slice this in half crosswise to make two pieces roughly the thickness of the end piece.

Dissolve 1/4 cup of kosher salt in 1 quart of water (I use Diamond Crystal) and submerge the turkey breast. If you need more brine, make more in that ratio. Brine the turkey in the fridge overnight. Remove and pat dry before proceeding with with your turkey tacos.

An alternative to brining is to marinate your turkey breast. I really like a marinade of tequila, a little salt, and cilantro, plus lime. It definitely adds something to the tacos.

I cook my turkey tacos by searing them over very high heat in a comal or skillet. You want to get browning on the outside without overcooking the center. It’s OK for the meat to have a blush of pink, but you want it neither rare nor desiccated. Let the pieces rest a bit on a cutting board, then chop.

This is key: I’ve seen many other recipes for turkey tacos with slices of turkey breast. You can guess what happens when you bite into your taco: Your teeth pull the entire piece out. Chopping prevents that tragedy.

Keep in mind that this is my rendition of turkey tacos. There is no reason you can’t change the cheese and toppings to suit your own taste. Some other good options would be a simple pico de gallo, some other salsa, such as my salsa negra, shredded cabbage or lettuce, Mexican cheese… you get the point. 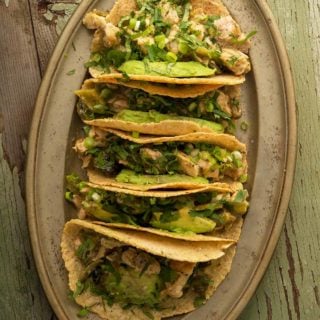 NOTE: This recipe doesn't include the brining time, if you are brining the turkey breast.