White pozole, pozole blanco, is a specialty of the Mexican state of Guerrero, and is considered by some the purest of all pozoles.

Unlike my recipes for pozole verde and pozole rojo, this version represents the third color of the Mexican flag — and yes, a galaxy of dishes a la bandera, like the flag, exists in Mexico.

The beauty of pozole blanco is its purity: Nothing can distract you from the broth, which is the star here. Yes, it is designed so you can add green or red salsa to your bowl, making this soup something of a dealer’s choice, but I prefer it clear, with lots of dried chiltepin chiles crushed into it.

In a perfect world, you would nixtamalize your own corn, nip off the root end of each kernel, and simmer that with a pig’s head. This is what I did. Why is this the perfect base for pozole? Because this is how it’s been made, more or less, for centuries in Mexico.

The freshly nixtamalized corn (here are my instructions on how to make nixtamal) tastes so much better than either canned hominy or dried, pre-nixtamalized corn, that it’s hardly the same soup.

But I get it: Not everyone is going to go for this. Your preferred alternatives would be 1) dried, pre-nixtamalized corn, and 2) canned hominy. The first is available through that link, the second in most supermarkets. Sweet corn is not a substitute.

As for the pig’s head, it has meats of varying flavor and color, and there is so much collagen in it that the broth will set up like jello in the fridge; this is a good thing, because that collagen lends heft and body to the broth. You simmer the pig’s head with the corn until the meat wants to fall off. You then fish it out and strip the meat off, chopping the weirder bits small and leaving the obviously meaty bits large.

Again, I get it. Not many of you are going to go looking for a pig’s head to make pozole blanco. So barring that, buy pork shoulder plus a couple pig’s feet, which are available in many markets. If you can’t get pig’s feet, the world won’t end, but your pozole won’t be as good. Like the head, you simmer the feet until tender, fish them out and chop the meat and skin up small.

You can of course make pozole blanco with chicken, or any other white meat bird, like pheasants or turkey. If you do, try to get some chicken feet from the market for that collagen. Or, go for poultry + pig’s feet.

I am obsessing on the meat and corn here because that is the soul of pozole: Everything else is jazz.

A typical pozole blanco in Guerrero will have onions and garlic, plus bay leaves and Mexican oregano in the broth, and often some allspice berries, cloves and black peppercorns. Super simple.

Then, when you serve it, everyone can add whatever they like to their pozole. Common toppings include: limes, shredded cabbage, sliced radishes, avocado, pickled white onion, cilantro and dried hot chiles.

One other thing. If you want, you can add a salsa to your bowl to make it red or green. If you do, my recommendation is my tomatillo salsa verde. 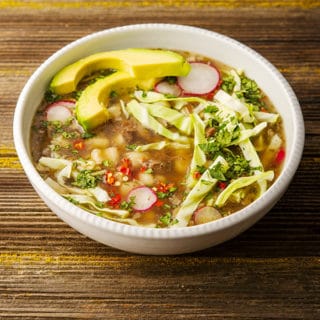 Definitely read the headnotes to this recipe, as you'll get a lot of insight into what makes a good pozole blanco. Once made, it will keep for a week in the fridge, and it freezes well.
Prep Time20 mins
Cook Time4 hrs
Total Time4 hrs 20 mins
Course: lunch, Main Course, Soup
Cuisine: Mexican
Servings: 12
Calories: 137kcal
Author: Hank Shaw

NOTE: If you are doing the chicken or other poultry version, you will want the equivalent of 2 chickens, or about 5 to 6 pounds of poultry, plus maybe a pound or two of chicken feet, or 2 pig's feet.