Pipian verde, a green, pumpkinseed-based sauce, is one of those bedrock dishes in Mexican cuisine that, like chili or gumbo, has as many variations as it has cooks. This is my version.

The origins of pipian verde date back well before the arrival of the Spanish in the 1500s, and most of the ingredients are native to Mexico. Variations on this sauce exist in both the Maya and Aztec traditions, which makes sense given how important pumpkins and squash are to New World cooking.

The flavor is smooth, silky from the fat in the pepitas as well as the lard or oil you cook the sauce in, tart from tomatillos, warming but not overly spicy, with varying bright notes depending on which sort of herbs you use.

As I mentioned, a great many versions of pipian exist, in colors ranging from this pretty green, to beige and brown, to a vivid red; I do have a great recipe for pipian rojo, the red variety.

Pipian verde is green not only because it uses pepitas, hulled pumpkinseeds, but also green chiles, tomatillos and lots of green herbs or leafy greens.

The sauce is never cooked for very long, otherwise it would dull to a drab olive green. But most versions do cook it, to meld and mellow flavors. Lard is the fat of choice, but you can use oil.

Once you look at the ingredients, you might think this is really mole verde, but there is a difference between mole and pipian. Mole verde may or may not have pumpkin or squash seeds, but pipian verde always does — at least in the several dozen recipes in English and Spanish I’ve read, as well as the renditions I’ve eaten here and in Mexico.

Other than that, you can play around with the chiles and the green things.

I use jalapenos from my garden as well as either Hatch or poblano chiles. Any combination of reasonably hot and mild green peppers will do. You don’t want it mega hot.

The green things are all over the map. I use epazote, cilantro and hoja santa because I grow them in my yard, but I’ve also used lambsquarters, sorrel, radish leaves or mustard greens, even lettuce.

Your liquid can be water, but I prefer to gently poach a pheasant, some quail, grouse or partridges, then use that broth for the pipian verde. Chicken, rabbit or fish are the normal accompaniments in Mexico. (Hungarian partridges are in the photos.)

Like a lot of good Mexican sauces, you char onions, garlic and chiles first, then roughly chop and put in a blender with toasted pepitas as well as the herbs and such. Puree with the aid of the broth until it has the consistency of melted ice cream, then cook in lard or oil just about 15 minutes or so.

Normally the birds or rabbit I poached will get a bath in the pipian verde, but if I am doing fish, I’ll still use chicken or poultry broth to make the sauce because later, when you have leftovers, pipian verde made with poultry broth will be more versatile than that made with a fish or shellfish broth.

And you will likely have extra sauce, which can be reheated gently with a little more water or broth, for about 5 days after you make it. Afterwards it will sour and turn ugly. It doesn’t freeze well. 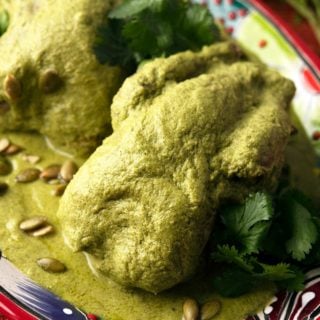 Most of the time you will submerge a chicken or pheasant, some quail or partridges, a rabbit or two, or a grouse in water with salt and let this cook gently until the meat is tender. You can make this initial broth as elaborate as you want, but it need not be. This is the broth you use to make the sauce, and the meat that will be sauced.