If you are looking for a good monkfish recipe, look to Spain. The Spanish eat quite a lot of monkfish, where it is called rape, pronounced “rah-pay.”

This dish is from Catalonia, where Spain meets France on the Mediterranean side. It’s a wonderful sauce! Roasted garlic, tomatoes, a little saffron — you’ll want to make it no matter what fish you happen to have handy.

So yeah, don’t get all hung up on this being a monkfish recipe, because although it is, you can use whatever firm fish you have on hand. Other great options would be tuna, cobia, lingcod, codfish, cusk, snapper, walleye, smallmouth bass — hell, even chunks of carp would be good here.

I learned about this recipe a while back, when I read Daniel Olivella’s great book Catalan Food, which I definitely recommend. There is also a recipe similar to this in one of the late, great Penelope Casas’ books. Look her up, too if you like Spanish food.

You may notice that I do a lot of Spanish fish and seafood dishes on this site. It’s because they are some of the world’s best. Usually simple, but with sufficient twists and turns in either ingredients or technique to make them interesting.

There’s codfish pil pil, which uses the fish’s own juices to emulsify an olive oil and garlic sauce. Hake with green sauce, a super bright green sauce that is, frankly, good on anything. Tons of recipes for salt cod, of which salt cod fritters are my favorite — and if you don’t like salt cod, just make the saffron aioli that goes with it. Serve that on any fried fish and it will please a crowd.

This monkfish recipe follows a little more in the vein of the saffron aioli in that it’s a blended sauce using saffron that bathes the fish (or let’s be honest, pretty much anything) in goodness. You definitely notice the saffron in there, but the dominant flavors are warm, roasted garlic accented by the sweet tang of the tomatoes.

You can make the sauce up to a day ahead and keep it in the fridge if you want.

The monkfish is simply seared in olive oil. If you’re not familiar with monkfish, it is a very firm fish that doesn’t flake like most other fishes; some call it poor man’s lobster. I don’t agree, but monkfish is still very good. I got mine from E-Fish, a company that will ship you fish and seafood directly from the fisherman. This monkfish comes from New England.

They are the stuff of nightmares to look at, but primarily you will get only the tails; sometimes you can find cheeks, and if you can get them, they are perfect in my recipe for halibut cheeks.

I like to serve this recipe with Spanish wrinkled potatoes, but rice or crusty bread are other good choices. You’ll want a light red wine, a dry rose or a big white wine here. 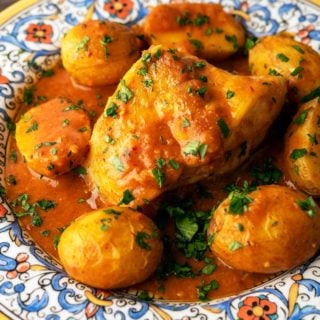