While the word might look odd, German käsespätzle is really just their version of mac and cheese, using spätzle, little pasta dumplings. It’s easy to make, versatile and kid friendly.

Pronounced something like “KAYS-a-schpet-zleh,” käsespätzle is an alpine dish with renditions ranging from Germany to Austria to Switzerland, and there is something similar in alpine Italy, too.

At its core, this is basically a German mac-n-cheese with some pheasant bits tossed in. It’s easy, homey, and kids love it. You can serve käsespätzle in a big casserole, or, for a dinner party, in individual ramekins. It reheats well, so you might want to make a big batch on the weekend and eat it for weeknight meals.

Most recipes don’t include a protein other than cheese, but I really wanted one, and pheasant breast seemed like a perfect fit. Think of this as a German answer to my recipe for green chile mac and cheese, which also uses shredded white meat.

You can buy premade spätzle in most supermarkets, either in the “Ethnic” section near the Jewish foods, or it will be in with the pasta.

That said, spätzle are easy to make. Here is a basic spätzle recipe (it’s in the recipe card), and I have a number of other cool spätzle recipes here on Hunter Angler Gardener Cook, such as acorn spätzle, squash spätzle, spinach spätzle and spätzle made with rye flour. Any of these will work for käsespätzle.

Feel free to substitute flours here. With game, I like using old wheats like emmer, einkorn, or spelt. Rye, barley, or whole-wheat flour are also fun.

Note that if you make your own spätzle, you will want a spätzle maker. They are cheap, and make the process way easier. A perforated pan works well, too.

There are two traditional cheeses for kasespatzle, both common in American supermarkets: Gruyere and Emmentaler. Both are great, but I prefer gruyere.

If you can’t find either, a white cheddar will work, as will a good Swiss. And you can mix and match. I used a semi-hard provolone once and it was great. 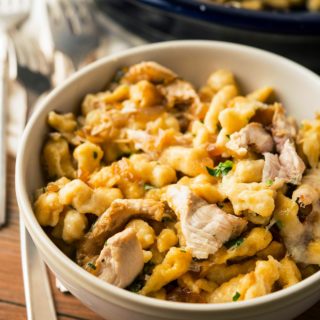 Once made, kasespatzle reheats well. Put portions in an ovenproof container, cover and reheat at 350°F for about 20 minutes.