Spaetzle, or, more properly spelled spätzle, are little German or Austrian dumplings that are easy to make and fun to eat. They are also versatile, meaning you can use alternate ingredients to get different flavors, as in this case with spinach spaetzle.

I’ll walk you through how to make green spätzle, and I am using that term because pretty much any soft, green, leafy thing can be used to do it.

This post is called spinach spaetzle because chances are that is what most of you will use to make this recipe. But I used stinging nettles in the photos. If you are interested in using them, start by reading this tutorial on cooking with nettles. The only differences between spinach spaetzle and these dumplings are that nettle spätzle are slightly briny, and the green with nettles is a touch bluer.

Other than spinach or nettles, good choices to play with would be parsley, chervil, lambsquarters, orache, New Zealand or Malabar spinach, chard, dandelion greens, sorrel, angelica, and dill. Now if you want to take spätzle out of the Northern European tradition, you could get funky and use cilantro, perilla, or even epazote or hoja santa.

Know that chard is about as tough a leaf as you want here. Collards won’t work, for example, unless you cook the hell out of them first, which you can certainly do if you want. The reason is because normally, when you make something like spinach spaetzle, you just blanch the greens quickly, shock them in ice water and puree.

The wet, thick, vivid green mass then gets mixed with flour of some sort, plus eggs and some seasoning. You then push the batter — and batter it is, not a dough — through, ideally, a spätzle maker, which costs less than $15, or a perforated pan, or a colander — or you can get all German grandmother and flick little bits off a cutting board into boiling water.

Once the dumplings float, give them another minute, then move them to a baking sheet to cool. Toss with a little oil so they don’t all glob together. You can eat spinach spaetzle like this, or, do what I do, and fry them in bacon fat. Yes, you want to do this…

It is common practice to fry spätzle after boiling. This gives the dumplings a little crunch on one side and adds another layer of flavor.

If you want a sauce, keep it simple: Toss some broth and maybe saffron — it’s pretty and the yellow contrasts nicely with the vivid green of spinach spaetzle — scrape up any browned bits in the pan, maybe add some peas and another herb, and finish with a touch of vinegar or lemon juice.

This is a damn good meal in and of itself, but it’s also a wonderful side dish for all sorts of springtime meals. Give it a go! 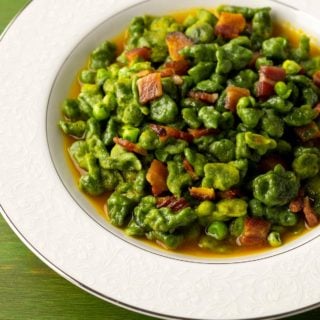 Keep in mind this is a recipe that works with any soft, leafy green. See the headnotes for details. Once made and oiled, you can keep spaetzle in the fridge for a few days.
Prep Time30 mins
Cook Time20 mins
Total Time50 mins
Course: Main Course, Pasta, Side Dish
Cuisine: German
Servings: 4 servings
Calories: 416kcal
Author: Hank Shaw