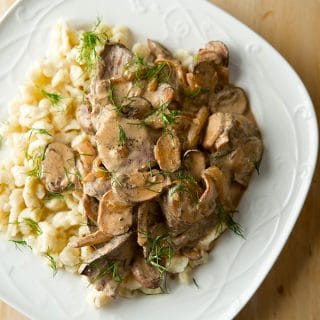 This one is a classic. I mean really: Who hasn’t eaten beef stroganoff?

I’ve seen (and eaten) so many versions of this French standby (yes, despite the name it’s a French dish) that I’ve lost track. They’ve ranged from horrible — cream of mushroom soup and hamburger — to sublime renditions done with care and with great ingredients. I hope you find this recipe one of the latter.

Stroganoff has traditionally been made with quality meat, sliced thin. That means cuts like sirloin or even filet mignon in beef. Hamburger versions are OK, but not my thing.

With venison, thinly sliced pieces of backstrap mixed with mushrooms, shallots, dill and sour cream are the ticket. This is filling, easy-to-eat cool-weather food of the first order.

Know that there is huge variation in stroganoff recipes. A few things are pretty consistent, however. To be a proper stroganoff, you must have thinly sliced red meat — beef, lamb, venison, elk, etc. — sour cream, mushrooms, some sort of onion, and butter. Lots of butter.

What to eat it with? Well, historically it’s been French fries, believe it or not.

But here in America stroganoff is almost always served with egg noodles. This tastes great, but is brutal to photograph. (I think Holly did a great job with these photos, no?) So I went with Austrian spätzle, which are a lot like egg noodles.

You can do whatever, but I really like the way the stroganoff matches with the little spätzle dumplings. And if you don’t want to make these plain Jane spätzle, try my pumpkin spätzle or nettle spätzle, which can also be done with spinach.

My version of venison stroganoff relies good, fresh mushrooms, shallots, a splash of Madeira wine, and both fresh dill and a rarer ingredient, dill pollen, which you can omit if you can't find it. As for the dairy, butter is the fat and sour cream is the sauce. Can you loosen it with some heavy cream? You bet. Sometimes I do, sometimes I don't. I did not in the photo.
Prep Time15 mins
Cook Time20 mins
Total Time35 mins
Course: Main Course
Cuisine: French
Servings: 4 people
Calories: 806kcal
Author: Hank Shaw