Gallina pinta, “painted hen” in Spanish, is at its core a sort of pozole — a simple stew of hominy (nixtamalized corn) and meat — only this specialty of Sonora, Mexico also adds beans. It’s a hearty stew to make when the weather cools.

Beef is the most common meat in gallina pinta, but I’ve seen recipes that use venison, and that’s what I used here. Any red meat will do. Interestingly, gallina pinta, despite its name, never uses chicken. Go figure.

This is one of those recipes that is as good or as average as you want to make it.

Sure, you can make gallina pinta with canned beans, canned hominy and even canned meat. People do, and it’s perfectly fine to make it this way if you are busy on a a worknight.

But it will be so much better if you make everything from scratch — even the nixtamal, or hominy.

The corn used in Sonora is always white — if your family makes it with another color, let me know in the comments — and it is pozole corn, which means the kernels are big and starchy. You can’t use sweet corn here.

The gold standard of any pozole corn — whether it’s for gallina pinta, pozole blanco or pozole rojo — is a Mexican variety called cacahuazintle. You can buy it online from Masienda.

If you choose to nixtamalize your own corn, and I do recommend you trying it at least once, you’ll need to start your gallina pinta a day ahead. Here are instructions on how to make nixtamal, which is what Mexicans call hominy.

As for the beans, simple pinto beans are a fine choice, but I prefer tepary beans, which are native to Sonora. They are smaller, meatier and, well, just plain cooler than regular pintos. Any yellow, brown or tan bean will do.

For the meat, it’s your call.

Some prefer chunks of stew meat, and that’s traditional and normal. I however like to take my gallina pinta to the next level and use a whole smoked venison shoulder that I then braise until it falls off the bone.

You then chop it so the strands of the meat are not too long, so you can get a nice spoonful.

To get there, on Day One, you nixtamalize your corn and smoke your meat. Day Two is when you cook everything.

Know that the venison and the corn will take about the same time to get tender, if you are starting from dried corn. If you are using canned hominy, simply rinse the corn out of the can until it’s clean and not sludgy, then add it to the gallina pinta in the last hour.

You will want to wait to add salt to your gallina pinta until the beans and corn are tender, because adding salt to them too soon will toughen their skins.

Top your stew with cilantro and onions that you’ve soaked in some lime juice. You’ll also want some dried chiltepin chiles if you can get them (I grow them), which you crush at the table. If you’ve never had chiltepins, they are wild chiles that are super spicy at the start, but fade quickly.

Once made, your gallina pinta only gets better in the fridge over the next few days, so make a big batch on a weekend and eat off it all work week. 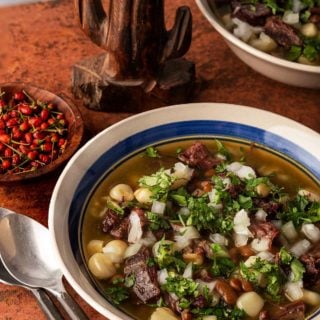 Note that the prep time and cook time don’t include smoking the meat or nixtamalizing the corn, which are added options.