Barley risotto is a dish with ancient roots. Barley predates the appearance of rice in Italy by many thousands of years, and thick porridges of barley date back to ancient Rome. Here’s a modern version kicked up with mushrooms and a rich stock.

The primary reason barley risotto works is because barley and short-grained rice share the same type of starch, which sloughs off into the liquid if you stir it while cooking.

To that end, you can’t make barley risotto by baking or really any other means than by making it exactly like a regular rice risotto — which is to say adding liquid little by little, stirring almost constantly, until the barley is tender and has released enough of its starch to make a creamy sauce.

You will see all sorts of other recipes claiming to make a creamy, starch-rich barley risotto without this method, but none will make a proper risotto.

Note that you really want pearled barley for this recipe because the other variety, hulled barley, takes a lot longer to cook and doesn’t release its starch as easily. You can still make a risotto with hulled barley, but it will require more elbow grease and time.

Side note: Barley is not gluten-free. Nor is rye. Moving on. 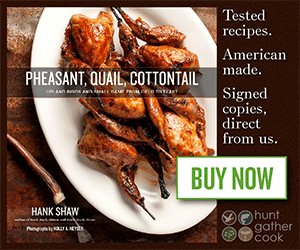 Why use barley for a risotto? First, it is a way to touch the food of the ancients, which I find pretty cool. You can eat like the hordearii, the gladiators!

Second, barley is super healthy, high in fiber and vitamins and such. Third, barley is a main crop in the cold places of the world, so this method of cooking really works with northern ingredients.

That’s where I took this barley risotto.

Elements of This Barley Risotto

I thought about this dish as I was flying home from Alaska, where I had completed the Grand Slam of Grouse with a spruce grouse and ptarmigan hunt; you can read the story of that hunt here.

I had two spruce grouse, and I wanted to feature them in some sort of spruce grouse recipe. They’re not large birds, so I decided to toss them in the stock pot with the ptarmigan carcasses. Then, when the meat was done on the breasts and then, later, legs, I stripped it off, shredded it and held it aside.

Stock made (I used the same general principles as my pheasant stock recipe), that plus some onion and garlic from my garden formed the base of this barley risotto.

I rehydrated some porcini mushrooms I’d gathered earlier this year, and added the soaking water to the liquid for the risotto. Chopped fine, they went in with the onions at the beginning.

Once the barley was tender — keep in mind barley risotto takes longer to make than a rice risotto — I added the shredded spruce grouse, grated pecorino cheese and a big knob of butter.

Clearly most of you won’t have spruce grouse or porcini lying around. Don’t worry about it.

Any dried mushroom, or fresh, for that matter, will work. You can buy little packets of dried porcini in most supermarkets, and if you can’t find them and want to use fresh, go for shiitakes or cremini.

If you are a gatherer and have other mushrooms to play with, by all means use them. Morels or black trumpets would be particularly good in a barley risotto.

As for the meat, any white meat works, from chicken and turkey to other grouse, quail, partridges, squirrel or rabbit.

Barley risotto doesn’t keep very long, although you could reheat it with a little more stock the following day. It does not freeze well at all. 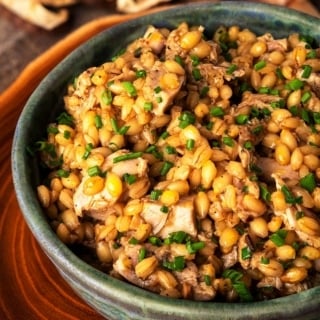