Mexican aguachile is something of a hybrid between sashimi and ceviche, although the closest thing to it is really Peruvian tiradito, but that is a lesser known dish. And while aguachile is normally green (I have a recipe for that here), this is a black aguachile: aguachile negro.

There are a few ways to make aguachile negro, some involving charred onions, some using a spice mix called recado negro, but most, including this recipe, use soy sauce and Maggi.

Both sound like not-so-Mexican ingredients, and, strictly speaking, they’re not. But both sauces have been used in Mexican cooking for generations. Soy, especially, came with Asian immigrants as far back as the Spanish galleon days.

It may be hard to tell from the pictures, but aguachile is essentially a ceviche served immediately, so the seafood is still very much raw. You’ll definitely want to brush up on your raw seafood safety (I have an article that covers the basics here), but suffice to say that most seafoods need to be pre-frozen to kill potential parasites.

This is enormously important with shrimp, which is the normal seafood used in aguachile negro and its other versions, because truly raw, never-frozen shrimp can carry parasites that will give you liver flukes. No bueno.

I used some pretty scallops here that I got from Togue over at Downeast Dayboat, and they are pretty damn spectacular. Sweet, big and meaty. Any nice scallop will do, as will the aforementioned thawed shrimp, or fresh clams or oysters. Fish is common, too, especially tuna and the various jacks like yellowtail. Tuna especially are almost never parasitized, so they are safe to eat never frozen.

Some advice for inlanders: Do this with fish, but be sure to freeze it at -4°F for a week first. Or use cooked crawfish tails. Or just buy seafood from a really good market.

Aguachile negro can be as picante as you want it, both by adding chiles to the sauce itself, and by sprinkling dried chiltepin chiles over the top. My advice is to go with the chiltepins or chile pequins if you can get them — Latin markets almost always have them — and skip the chiles in the sauce. But either way works.

Normally aguachile negro is served on tostadas, and that’s how I recommend it. All by itself is nice, too, but you will find yourself looking for the tortilla chips to offset the flavor bombs.

Make your aguachile and eat it. It does not store well.

If you want to do a Mexican seafood feast, serve your aguachile negro as the first course, then caldo de camaron as a soup, then lobster tacos. 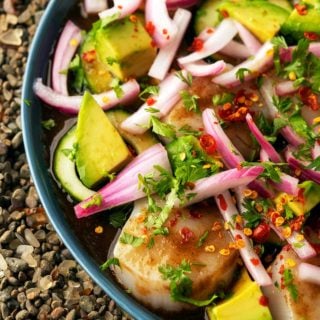 You can find black garlic in some supermarkets, Trader joe's tends to carry it, or you can buy black garlic online. Or just skip it.