Taiwanese beef noodle soup is serious Asian comfort food. It’s made with shanks, beef in most cases, but I’m using venison here. Pork, lamb or bear would be OK as well. Why shanks? In a word, silk.

Using shanks for this soup makes the broth extra silky, thicker than water, with body and a certain slickness you can only get from collagen. And shanks are loaded with collagen.

Over the years, I’ve been building a library of excellent venison shank recipes, and I wanted one from Asia. So I started looking around, and found Taiwanese beef noodle soup.

It makes sense to use shanks in this soup because of that collagen, but you could also use shoulder or neck meat. If you are using beef, shanks are easily found in Asian markets, and I see them a lot in regular supermarkets, too. Veal shanks are even better if you can find them.

At its core, Taiwanese beef noodle soup is that broth, plus chunks of shank meat, lots of Chinese wheat noodles, some baby bok choy or something similar, and lots of chopped herbs like cilantro and green onions.

One esoteric item that is almost always added is fermented greens, sort of like sauerkraut. I have a great recipe for Chinese pickled mustard greens here, but you can skip this and the soup will still be great.

It is street food, something to order on a cool, rainy day to slurp down to keep warm. That said, it’s just as good as a Sunday supper, and, once you make the broth, it will keep for a week in the fridge.

A word on the noodles. Actual Chinese noodles make a difference. They are paler and chewier than spaghetti, which would be a reasonable substitute. You can obviously find them at Asian markets, but in many cases you will see these noodles in the Asian section of regular markets. Ramen noodles are similar and will work, too.  Or, you can make your own.

If you are familiar with “red cooked” dishes, like red cooked pork, it is a braise made with spices, cooking wine and soy sauce. This is basically that, but thin enough to be a broth. Taiwanese beef noodle soup is much darker and richer than Vietnamese pho, but they eat similarly: Chopsticks in one hand, spoon in the other. Slurp some noodles, ideally wrapped around a piece of tender shank and some herbs, then a spoonful of broth.

The way to eat this all week is to have lots of broth and shanks cooked, on, say, a Sunday. Then, when you want to eat some soup, all you need to do is heat the broth and meat, boil some noodles and top with the vegetables and herbs. And, like most braises, Taiwanese beef noodle soup is indeed better a day or three after it’s made.

There are lots of versions of this soup, and to make this recipe I read several dozen, both online and in my collection of Chinese cookbooks. That said, I am indebted to Hsiao Ching-Chao’s Chinese Soul Food. Her recipe is excellent, and I can highly recommend her book. 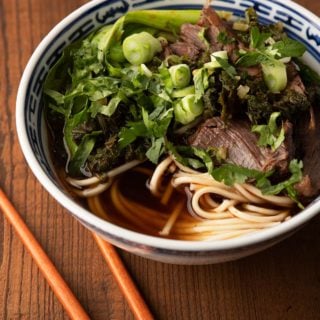