Dan Dan noodles are likely one of the few Sichuan dishes many Americans know about. Wheat noodles, tossed with sesame paste, soy and chile oil, topped with ground pork or some other meat. But this dan dan noodles recipe is a little different.

No matter which of the many variations you find, they are all street food, named for a shoulder pole used to carry the pots and ingredients for the noodles, and while its origins are in Sichuan, there are versions of it all over China, as well as here in the U.S.

So, I have to tell you that the first time I ate dan dan noodles, they were gross. It was like eating sweet peanut butter noodles. I swore off them as some nasty side note of Chinese cuisine, until I bought Fuchsia Dunlop’s book The Food of Sichuan. Dunlop, an Englishwoman, graduated from culinary school in Sichuan and is generally considered the authority on that province’s food in the English language. The book is amazing.

And in it are two dan dan noodles recipes, neither of which were sweet or peanut buttery. I later learned that what I disliked about what I’d eaten here was something Chinese chefs did to the dish to make it appeal to American palates. Go figure. Guess I don’t have a typical American palate.

I was especially struck by Mr. Xie’s dan dan noodles, which in Dunlop’s book use ground beef and not pork. The thought struck me immediately. Hey, I happen to have a lot of ground venison and duck in the freezer, and this would be awesome! For those of you squinching your noses, know that once you grind meat, it pretty much tastes like any other red meat.

Neither of the versions Dunlop includes in her book are soupy, which I like. American Chinese versions are often soupy, and it’s not my favorite with this flavor combination.

What are those flavors? Meaty, spicy but not overly so, rich from the sesame paste, a bit salty from both the soy, and the preserved mustard stems that are part of the traditional minced pork topping.

If you want to make this dan dan noodles recipe the way Dunlop does, you will need to get yourself to an Asian market. There are several unusual ingredients in it that are all vital to the flavor. That said, I will give you rough alternatives that are easier to find. It’ll taste different, but will be more accessible to most of you reading this. I’ll also link to online sources of these ingredients if you want to go that route.

Everything else is easily obtainable from a supermarket. As for the noodles, you want Chinese wheat noodles, but Italian vermicelli is a decent substitute. Definitely check your supermarket’s Asian aisle, though, as they often have the Chinese noodles there.

Putting together an authentic dan dan noodles recipe requires a bit of forethought, but the cool thing is that once you have the ingredients and have made the topping, you are ready to make the noodles whenever you want for about a week, which is how long the topping will keep in the fridge.

When it comes time to serve, the idea is to boil your noodles, make the topping while the water is heating, put a little of the sauce ingredients in each bowl, top with the meat, then let everyone mix and eat as they want.

If all this sounds like a long walk for a cup of coffee, keep in mind that I was skeptical, too. But once I made real deal dan dan noodles recipe, I was convinced. I think you will be, too.

Incidentally, I cook a lot of Sichuan food. You might want to try my recipes for fish fragrant chicken (or pheasant, or whatever), Sichuan rabbit with peanuts, or twice cooked pork. 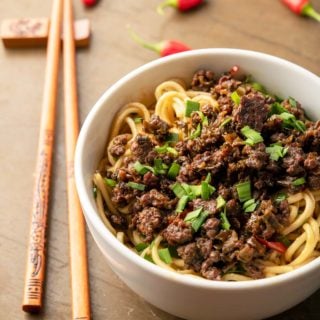 This recipe is a fairly faithful rendition of Mr. Xie's Dan Dan Noodles, from the excellent cookbook The Food of Sichuan, which I highly recommend if you like the food from that region. You'll see all the notes on special ingredients and substitutions above.
Prep Time20 mins
Cook Time15 mins
Total Time35 mins
Course: lunch, Main Course, Pasta, Snack
Cuisine: Chinese
Servings: 4 servings
Calories: 598kcal
Author: Hank Shaw