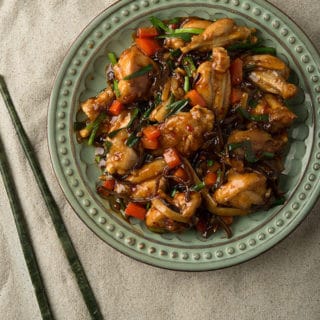 I suppose you can eat frogs all year long, but for most of us, frog legs are summer food. After all, summer is when you gig them.

Normally I make French fried frog legs when I gig a batch of bullfrogs; it’s an easy, homey way to cook them. But if you get enough for more than one meal, this Chinese-style frog leg stir fry hits the spot. It’s an amalgam of some of my favorite classics: There’s a little of General Tso’s in here, a little black bean-and-scallion action, a touch of kung pao.

You get a bit of crunch from the batter on the frog, sweet-and-spicy flavor from the sauce, then the varied textures of the vegetables. I really like the sliced wood ear mushroom in here, as it adds a very solid, almost meaty texture to the fish.

You will need a few Chinese ingredients to make this recipe, notably the chile bean sauce. You can find it in the “Asian section” of most supermarkets, or you can buy chile bean sauce online.

It’d be good to have the bamboo shoots and the wood ear mushroom, and both are commonly found in the Asian section, but if you can’t find them, you can use other vegetables.

Incidentally, if you want to buy frog legs, pretty much every Asian market has them in the freezer section.

The frog legs are precooked in much the same way the chicken is in General Tso’s or orange chicken, which is to say battered and fried and then stir-fried. It makes everything better.

One note on eating this stir-fry: It is best done with chopsticks, as the frog is still on the bone — the meat slides right off the bones. Deboning a frog is of course possible, but is also a massive pain. I’d only do it if you were really skeeved out by bones in a stir-fry.

If you have whole frogs and don't know how to prep them, here is my tutorial on how to clean a frog.