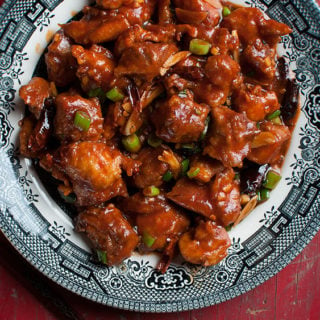 Many of us have eaten The General’s chicken at cheap, steam-table Chinese restaurants: Gloppy, over-breaded and so sweet you fall into diabetic shock afterwards. It’s crap. Especially if you’ve ever eaten General Tso’s chicken in a good Chinese restaurant.

Done correctly, General Tso’s chicken is irresistible: Tender meat with a light, crunchy batter reminiscent of tempura, tossed in a sauce perfectly balanced between sweet and spicy, studded with green onion and Chinese tien tsin chiles. It is the crack cocaine of Chinese food. You want it. No, you must have it. At any cost. I know people who will do shameful things for a plate perfect of General Tso.

This General Tso’s pheasant is that plate, folks. And it has a history.

General Tso was in fact a real general in China. Hunan, to be exact. But the general did not make this dish, nor would he really have recognized it. A Taiwanese refugee from Hunan named Peng Chang-kuei invented this back in the 1950s. Peng’s version was not nearly as sweet or crunchy as what we are all used to; that version has its origin in the early 1970s, when a chef named T.T. Wang, who had eaten Peng’s original in Taiwan, opened a Hunan restaurant in New York City.

By all accounts Peng loathed the American version of his recipe. Too sweet.

And he apparently rolled his eyes at the notion that extraneous vegetables such as water chestnuts or baby corn should appear in the dish, which is supposed to be meaty through and through. Fuchsia Dunlop has more details on the story here, and it is from her excellent Revolutionary Chinese Cookbook: Recipes from Hunan Province that my version originates.

My take on General Tso’s is slightly more powerful and hearty than most “authentic” versions. It is definitely less sweet than the cheapy Chinese style, and definitely spicier. I also make a little more sauce than Dunlop’s rendition because, well, I like the sauce.

And yes, I use pheasant breast instead of chicken. Pheasants happen to be indigenous to Manchuria in Northern China, and this is a wild food blog, after all.

And while I’ve never heard of General Tso’s beef or pork or whatever, I bet you could sub in other meats, too. Rabbit springs to mind. If you do, let me know how it went in the comments section.

Note that while you need a lot of oil to fry the pheasant in, you can reuse it several times. Just let it cool a bit and strain it through a paper towel back into the bottle.

Make this recipe. Then make it again. You will find yourself craving it in an almost unnatural manner. Like I said, it’s basically crack.

I of course use pheasant here, but chicken is the traditional meat for this recipe. If you do use chicken, use thigh meat instead of breast meat; it tastes better. There are a few unusual ingredients in an authentic General Tso's that you will want on hand, notably the black vinegar and the tien tsin chiles. Both are readily available in larger supermarkets or in Asian markets. That said, if you live in an area without large supermarkets or Asians, you can use malt vinegar and any dried chile.
Prep Time15 mins
Cook Time10 mins
Total Time25 mins
Course: Main Course
Cuisine: Chinese
Servings: 4 people
Calories: 341kcal
Author: Hank Shaw

When you're done with this recipe, try making Kung Pao with Pheasant, too. It's just as good!