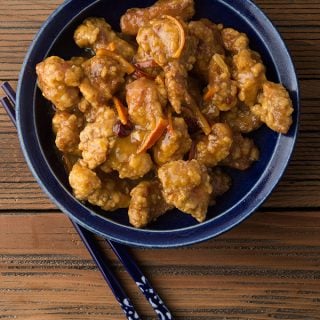 “Hi, my name is Hank, and I am addicted to Sad Panda’s orange chicken.”

Yeah, I admit it: I am a sucker for this crack-like approximation of Chinese food sold at Panda Express all over the country. I have no idea whether so-called orange chicken actually exists in China, although there is a vaguely similar dish called tangerine beef I like a lot.

If you somehow have never had it, orange chicken consists of pieces of chicken, usually thigh, marinated and coated in a batter then fried crisp, then tossed in a zippy, citrusy sauce that ranges from pleasantly sweet to cloying depending on who makes it. Some varieties also add chiles to balance things out.

If Panda does this, I can’t tell, so when I am there I always order it with some other entree that has those little dried chiles in it. I then bite off a piece of the chile and take a bite from a piece of orange chicken. The sweet-hot-sour is an addictive combination.

I didn’t set out to mimic Sad Panda’s recipe when I designed this rendition. I actually had a pretty pheasant breast recipe in mind, but found that when I thawed the breasts, they were kinda torn up. Not pretty enough for what I had in mind.

When this happens, Chinese food is one great way to go — everything’s cut into bits! So orange chicken it would be. My recipe is an amalgam of many I read up on, including purported Panda mimics. I also added some actual Chinese elements from what may be the dish’s origin, the tangerine beef I mentioned above.

The result is basically an “adult” version of Panda’s orange chicken. The crust isn’t as thick, but it’s crispier. The sauce isn’t as sweet, there’s significant heat from the chiles, and a bigger orange flavor from the juice, marmalade and the peel.

What’s more, the slivered peel adds a touch of bitterness that deepens the flavor of it all. If you loathe any sort of bitter, leave out the peel or just don’t eat it — treat it like a bay leaf.

Once you get the hang of this, which takes maybe twice, you will want it more and more and more. It’s addictive…

Clearly orange chicken can be done with any white meat. It will work with boneless rabbit, grouse, partridge, quail or turkey, too. The optional ingredients -- white pepper, tangerine peel and green onions -- give the dish a more Chinese feel. I personally like this dish sweet and hot. But some people just like sweet, and that's OK. You should know this is not as sweet as Panda Express. To get there you will need another tablespoon or even two of honey or marmalade. And if you like a thicker crust, add a couple tablespoons of flour to the corn starch you toss the meat in.
Prep Time20 mins
Cook Time15 mins
Total Time35 mins
Course: Main Course
Cuisine: Chinese
Servings: 4 people
Calories: 270kcal
Author: Hank Shaw