Fried frog legs come in various forms, but I came to them as a child in French restaurants, lightly fried and served with parsley and garlic. So this is a French fried frog legs recipe, not the typical Cajun one you see a lot on the internet.

Fried frog legs said “luxury” to me as a kid because I’d only see them in fancy places — I also got a good snicker when they told me this is why the English call the French “frogs.”

How did I get these frog legs, you ask? I gigged them, in Lake Tahoe. Yep, the frog hunting is awesome up there — and what’s more, by killing them we were doing a good deed for the environment! Makes these fried frog legs taste even better. Of course it could be all that butter…

It all started when our friend Joel let me know there were frogs in them thar hills. Bullfrogs? Yep. Bigguns? Yep. We’re so there. Prepped with a few beers, we headed out for the Secret Spot, which, suffice to say, is somewhere around the lake on the California side between Truckee and South Lake Tahoe. Honestly I am not certain exactly where we were. It was dark, and did I mention I might have had a few beers?

Once you gig your frogs, you put them in a bucket with a lid to clean later. And yeah, you need the lid. Aren’t the frogs dead when you spear them? Um, sorta. Please refer to my post on how to clean a frog for the grisly details on this one.

Incidentally, if you wondering why there are bullfrogs in California, well, apparently, some chucklehead brought bullfrogs to Contra Costa County, in California’s Bay Area back in 1896. The plan was to ranch them as a sort of amphibious fish farm. Frog legs sold for the equivalent of $7.55 per pound back then, which, oddly, is about the same price you can get them for now.

Speaking of that, if you want to make fried frog legs, most of you will buy them. Asian markets are by far the easiest places to find frog legs, usually in the freezer section. Once in a great while butcher shops or fish markets sell them, but don’t count on it.

This particular frog legs recipe is a classic Provencal dish called cuisses de grenouille à la Provençale, and it is the way I first ate frog legs, back when I was a boy.

I can vividly remember it. Fried frog legs were part of the gourmet buffet at a place in West Orange, New Jersey called The Manor. I also remember that mom used to starve us all before we descended on the buffet like Visigoths. I am pretty sure I ate close to 10 frogs’ worth of legs at one trip to the trough alone.

For the record, fried frog legs really do kinda-sorta taste like chicken. Light, flaky, mild, they are like a combination between chicken breast, shrimp and crab. Damn good. Make more than you think you need because leftover are good cold the next day. 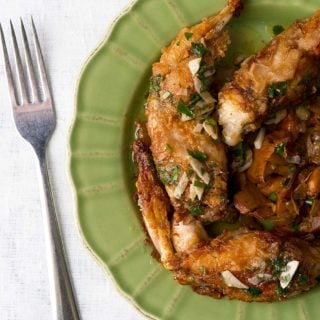 This recipe works best with a combination of clarified butter, which you can buy in large supermarkets as Indian ghee, as well as regular unsalted butter. Or, you can clarify butter yourself. You use the clarified butter to cook the frog legs and the regular butter for the sauce. Why bother? Clarified butter has a higher smoke point and holds up better when frying the frogs, while the regular butter tastes creamier for the sauce. You can of course use regular butter for everything, but it will scorch a bit.
Prep Time10 mins
Cook Time15 mins
Total Time25 mins
Course: Appetizer
Cuisine: French
Servings: 4 people
Calories: 413kcal
Author: Hank Shaw

I served my frog legs with sautéed chanterelles and crusty bread. But boiled or roasted fingerling potatoes would be another good option, green beans an ideal veggie, or maybe a bitter greens salad with a vinaigrette dressing. White wine or a lighter beer, i.e., a lager or pilsner, is a must.