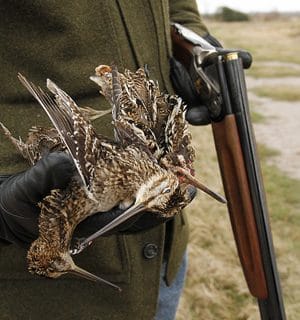 Duck hunting in California can be challenging, not because of frigid weather or gale-force winds — although that can happen — but because we can be so damn sunny. No wind, bright sun, highs approaching 60°F = no damn ducks. Grrr…

One Sunday I got up late to hunt the afternoon in one such bluebird day. The check station at the Delevan National Wildlife Refuge was a ghost town. Usually a passel of wader-clad hunters orbits the building, chatting amongst themselves and waiting for spaces to open up. Not today. The parking lot was deserted.

“Any room in free roam today?” I asked the officer at the station. He snorted. “Yeah, I think we got some.” As I drove out into the 5,800 acre marsh I texted Holly, who was out in the center of the swamp duck hunting with our friend Charlie. “Am heading up for snipe. Wish me luck.” She texted back: “Slow here. Am on a walkabout.” We’d meet up later.

I parked my truck and donned a pair of marsh boots, but I kept my jeans on. This drew some stares from the wader-clad group of guys parked nearby. Snipe hunting is not a popular activity in these parts. I ignored them, stuffed a handful of steel No. 6 shot into my pockets and took a walk. Screw the ducks today. I wanted to see if I could tag a snipe or two.

Snipe. Yes, I know the joke. But Gallinago gallinago is a real bird. The common snipe and the woodcock, which I hunted in Michigan this year, are two of the few remaining shorebirds we can hunt in America, the rails and sora being the others. Snipe are small, usually weighing less than a quarter-pound. They are typically solitary, or in smallish, loose groups poking their long beaks into the mud in search of yummy wormy things. You will almost never see them before they flush.

You hunt snipe by walking boggy areas, areas that are wet, more or less open, muddy, but not underwater. Holly had spotted an area that fit the bill on a previous walkabout in Delevan’s free roam area. 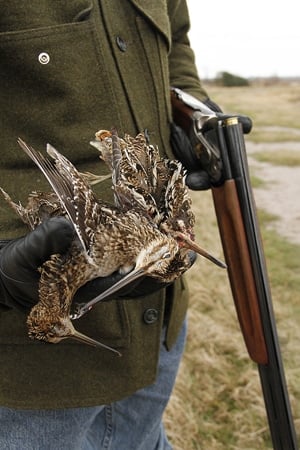 “You’ll know it when you see it,” she’d said. “There are sea beans around it everywhere.” Sea beans? Salicornia? Wow. pretty cool. These mostly live on the seashore, but can be found in alkali marshes. In fact, the last time I’d seen salicornia inland was while snipe hunting in the Delta Marsh in Manitoba. A good sign.

Most of my hunting time in winter is spent hunkered down among cattails and bulrushes in two feet of water, awaiting ducks and geese. Waterfowling is my passion, and I eat duck several times a week during our 100-day season.

But I am in love with the bogs that lie on the marshes’ edges. It is upland hunting in lowland places, and I have always been drawn to the water’s edge. Even if it smells like a bog. What’s more, shooting snipe can be so challenging that a “sniper” was originally someone skilled enough to shoot snipe.

I am one of those people, at least on a good day. I was marveling at the strange colors of the bog, the lurid spring green of new grass growing underneath a tiny forest of aged salicornia, which the cold had turned a translucent burgundy, when a bird flushed in front of me, shouting k-k-kill-dee, kill-dee, kill-dee, dee ,dee, dee… I relazed. Not a snipe, a killdeer. A no-shoot-’em.

This is one of the things that keeps the bogs open to crazy hunters like me: Snipe are legal game, but they have many, many cousins who are protected by law. Dowitchers, godwits, killdeer, stilts, plovers and endless clans of sandpipers. Shoot one of these and you can be fined, or worse. But careful observation makes spotting snipe easier. They almost always shout, scaipe! when they flush. It is distinctive enough to give them away.

Hunting snipe is merely a matter of ambling carefully through the bog with your head up and shotgun ready. The second you hear that scaipe! you need to find where the sound is coming from, locate the fleeing snipe and assess if you have a shot. This all happens in less than 2 seconds. If you can shoot the bird in those 2 seconds you are better off, because as soon as a snipe gets any altitude it begins to zig-zag.

This is a nearly impossible shot. Your only option after this starts happening is to let the snipe get higher, where it will often — not always, but often — level out and circle back to where you flushed it.

In the middle of this reverie I heard the noise I’d been waiting for: SCAIPE! A snipe flushed right at my feet! I was so flustered I could barely get my gun up, but I managed one shot, which was enough. The snipe fell dead. It was the only one I would see that day.

Back home, I had a decision. Freeze this little bird and wait until I had enough for a meal? Or roast it now as an appetizer? I went for the roast snipe appetizer. A rule in roasting is the smaller the bird, the hotter the oven. And not much that is legal to hunt is smaller than a snipe. So I set my oven at a roaring 500°F, and painted the bird with a little lard. A sprinkle of salt and it was ready for roasting.

A tip: Preheat your oven with lots of time to spare, as it can take 20 to 30 minutes for an oven to get to 500°F. If your oven gets hotter, get it hotter. An ideal temperature for snipe would be closer to 600°F — that way you will get crispy skin, too.

Also remember to rest the birds before serving. Even though they’re small, they still need to rest the same way a chicken or turkey does. Only don’t tent them with foil in this case, as it can lead to the snipe getting overcooked.

Ten minutes later it was done; snipe should be served medium-ish, not well done. I doused the bird with a little balsamic vinegar and black pepper and took a bite. Oh how I’d missed you, little snipe! It is a bird with a flavor all out of proportion to its size. As small as it is, one bird makes a great appetizer, and four a hearty meal. They taste like a combination of squab and duck, with something else. Maybe its the wormy things they eat?

The sun is shining as I write this. There is no rain in our forecast for a week or more. So I will be donning my boots again this weekend, in search of the mystical snipe.

While most of my recipes have some sort of domestic equivalent, this is not one of them. There is nothing you can buy that is even close to a snipe. Even a quail is significantly larger, and while squab is a close approximation in flavor, a squab is three times the size of a snipe. So non-hunters, you're out of luck. Hunters, try not to mess with your snipe too much, and by all means pluck them. Yes, it is persnickety, but this is more or less a ceremonial meal anyhow, so you might as well go the whole way.
Prep Time10 mins
Cook Time10 mins
Total Time20 mins
Course: Appetizer
Cuisine: American
Servings: 2 people
Author: Hank Shaw

Serve snipe as an appetizer. They are really pick-up-and-eat food, so a dipping sauce is one idea, but I prefer just a splash of really good vinegar.
Tried this Recipe? Tag me Today!Mention @HuntGatherCook or tag #HankShaw!