Nothing like rainy days — days and days of rain — to bring out the braised meat urge in me. Storms slow us all down, and there must be some sort of aromatherapy going on when you fill your home with the smell of slowly cooking goodness. On such days, braised deer shank really does it for me.

There is nothing quite like a shank, whether it be lamb, beef, veal or, yes, deer. For the hunters out there, we all know that we really shouldn’t waste a deer shank, but shanks have so much sinew and connective tissue there really isn’t much to do with them. So most of us grind it for burger meat.

This is a shame, as my shank-eating friends will attest. Shanks, frankly, suck if not cooked slowly and for a long, long time. The only other thing you can do with a deer shank besides braise it is to put them in a stock, or the classic Taiwanese beef noodle soup. But well-browned deer shank, bathed in aromatic juices and served falling off the bone? Seriously good stuff.

Shanks always need a good sauce, but which sauce?

You need something bold for a shank, and I immediately thought about a shank recipe from my friend David Leite in his book The New Portuguese Table.

Leite’s recipe has includes a lot of warm spices — cloves, cinnamon, allspice — as well as molasses. I love molasses.

Naturally I can’t leave well enough alone, so I modified Leite’s recipe by adding chiles and juniper berries, doubling the red wine called for and by finely pureeing the sauce at the end. Why puree? Because you can use the leftover sauce to dress pasta.

Typical sides for a braised deer shank would be a mashed thing and a green thing. Why mess with the formula? I really like mashed celery root, maybe with a couple tablespoons of mascarpone cheese and a knob of butter — if you’ve never done the mascarpone and mashed veggie thing, try it! Heaven. And for the greens, any greens you like; lambsquarters are my favorite.

The sauce is sweet-savory-spicy-hot-rich (did I mention there are four ounces of pureed, simmered homemade bacon in it?). The deer shank you can eat with just a fork — no knife needed. Silky-smooth and super flavorful.

Could you do this recipe with a lamb shank? You bet, although it will not be as flavorful because the animal was young. If that’s what you have, I suggest making my Greek venison shank recipe instead. This recipe works better with a hunk of beef shank, or the shank from a hog. Hunters, don’t hesitate to use this recipe on wild boar or elk shanks, too.

If you want to go another, lighter route, try my recipe for braised venison shank with garlic. 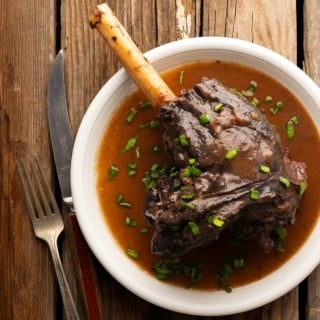 A properly braised whole deer shank is every bit as tender as a lamb shank. These venison shanks are so tender you could eat them with a fork, and the sauce is so rich you’ll want to save the leftovers for pasta sauce.
Prep Time20 mins
Cook Time3 hrs
Total Time3 hrs 20 mins
Course: Main Course
Cuisine: Portuguese
Servings: 4 people
Calories: 620kcal
Author: Hank Shaw

Remember that the leftover sauce is amazing over mashed potatoes or pasta.