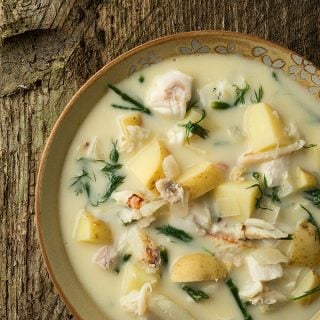 I will admit that this fish chowder recipe has an odd origin. It is not a New England fish chowder. It is closer to a Norwegian fish soup, a brothy chowder with a hit of dairy, not a gloopy thick chowder.

There are two ways you can make this fish chowder: A better way and an easy way. The better way involves making a quick broth with the heads and bones of fishes, or cracked shells from crabs, lobsters, crayfish or shrimp. And yes, this way of making the recipe uses whey. (See what I did there?)

Whey? Yes, whey. You see, when I designed this dish, I’d made some simple farmer cheese, and a byproduct of cheese-making is whey, the acidic liquid that separates from the curds you make cheese with. True to my thrifty Scots ancestors, I didn’t want to just toss the whey down the drain. What to do?

Look north. As it happens, the Scandinavians use whey a lot in their cooking. Icelanders especially. I happen to have a ton of Scandinavian cookbooks, and I found a recipe for a salmon soup with whey in Nanna Rognvaldardottir’s Icelandic Food & Cookery

and I was off to the races.

But don’t let a lack of whey stop you from making this fish chowder. No worries: Use white wine. Different, but still good.

But, if you make this recipe my way, it is remarkably good. I say remarkably because I make a lot of chowder.

The quintessential chowder to me is my mum’s Maine-style clam chowder, but I also make a Great Lakes fish chowder with Polish sausage and perch, and a salmon chowder that is very Pacific Northwest. I’ve eaten chowders all over the United States, too, so I am something of an expert on the subject. This fish chowder may just be better than my mum’s, which is blasphemy, I know.

Why? The broth is a big part, but so is the choice of fish and the finishing touches, which I’ll get into in a bit.

The fresh broth with whey and fish or seafood bits is a strong foundation for the chowder, but my version uses fish, clams and crab, as well as fresh sea beans, and is finished off with what the French call a liaison: A mix of egg yolks and heavy cream. (I do this with my cream of chanterelle soup, too.)

Yes, I know what you are thinking. Whey? Liaison? Sea beans? This is a pretty esoteric fish chowder.

It is and it isn’t. If you can make this soup as I do, you will be astounded at how good it is. But even with the hard-to-find ingredients left out, it is still an excellent fish chowder to make, no matter whether you are on the coast or the Midwest. I’ll walk you through it.

If you make this with homemade broth, whey and multiple kinds of fish and seafood, you may never make another chowder again. The next level down in difficulty would be to skip the whey and use white wine. Baseline is using chicken broth diluted a bit with the white wine and a bit of water — you want a nice light broth, not a heavy, chickeny flavor.

Do not skip the egg yolk and cream liaison. Yukon gold or other yellow, waxy potatoes are key, too. Russets will dissolve.

I use dill, but if you hate dill, use another fresh herb. Parsley, thyme, fennel fronds, lovage or marjoram are all good options. As for the fish, any firm, white fish works. I used lingcod. Try to add some other seafood, too. If you don’t have crab and clams around, look for those teeny pink shrimp from Maine or Alaska, or bay scallops, or crayfish. 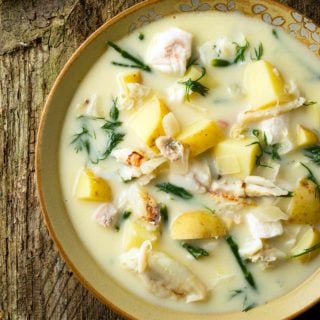 Keep in mind all the options I give you in the headnotes, and that basically whatever fish and seafood you have lying around will work.
Prep Time1 hr 20 mins
Cook Time20 mins
Total Time1 hr 40 mins
Course: Soup
Cuisine: Scandinavian
Servings: 8 people
Calories: 213kcal
Author: Hank Shaw

This chowder doesn't keep well once you add the egg yolks and heavy cream. If you want to make a huge batch of this, make the broth and the chowder base with the potatoes and onion, and chill it. Then, when you want to serve, add the fish, dill and the liaison.