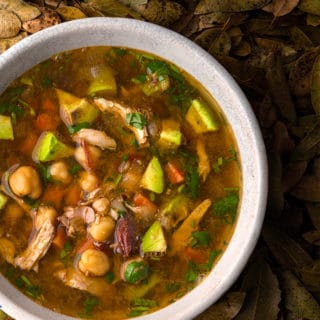 I didn’t set out to make an authentic Mexican caldo tlalpeño, but that’s what happened.

Caldo tlalpeño is a hearty soup that originates in an area just to the south of Mexico City called Tlalpan. The name basically means “soup those ladies in Tlalpan make.” Normally done with chicken, any white meat will work here, as would pork.

The story goes that this was a hearty caldo served by a woman hawker, selling to passengers on the rail line that went through Tlalpan. The soup was so good and so hearty it became a thing. And, more than a century later. It’s still a thing.

I happened to have some skinless Gambel’s quail from Arizona in my freezer, and I was casting about for something nice to make with them; they were hard-won birds, which you can see for yourself on episode of the TV show “The Flush” that I was on.

Quail are a southern bird, so I always look to Southwestern or Southeastern flavors when I cook them. In this case, way south, as Mexico City is 1500 miles from where we hunted these birds near Casa Grande, AZ. No matter, it was cold(ish) where I live in Sacramento and I wanted a nice, hearty soup.

So I stumbled on this one. Caldo tlalpeño is one of a few top-notch variations on the Almighty Chicken Soup that hail from Mexico; sopa de lima is my other favorite. Slow cooked chicken or quail or rabbit or turkey or whatever, stewed with a ham hock (!), as well as lots of familiar vegetables and chickpeas — all garnished with lots of avocado, lime and cilantro at the end.

What makes this recipe worth making? A few things:

Many traditional recipes include one or two seeded and diced or chopped xoconostles, which are a sour prickly pear fruit; this adds acidity to the soup. You can find them sometimes in Mexican markets, but if not, no biggie; just skip it.

Want another tip? Make a huge batch of caldo tlalpeño on a weekend and eat off it for the week. It just gets better after several days in the fridge.

(If you’re interested in another unbelievably good Mexican soup, try my recipe for chocolomo, which uses red meat like beef or venison.) 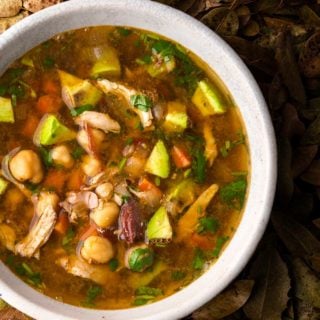