Xoconostle has to be one of the coolest words out there: Pronounced show-co-NOST-lee, it comes from an Aztec word meaning “sour prickly pear fruit.” Which, well, it what it is.

Most of us know that prickly pear is a spiky yet fantastic fruit. (I normally make a syrup out of the fruits, which is great in margaritas.) No matter what the variety, they’re called, oddly, tunas in Spanish. Someday I plan on making tuna with a tuna sauce…

Xoconostle is a cousin of the normal prickly pear; same genus, different species. Officially it’s Opuntia matudae. It is native to Central Mexico, but I’ve seen it here in Northern California as well as Arizona. So far as I know, however, these would have been planted by someone. Xoconostle does not occur naturally in the United States.

For the most part, xoconostle fruits, also called tuna agria, are green. Sometimes they have a pretty peachy glow to them, though. Nothing like the electric magenta of a good prickly pear.

Salsa de xoconostle is the most common way to eat this fruit, which is increasingly available in Mexican markets in the US. I found these at La Esperanza Market in Sacramento.

I commonly see two kinds of xoconostle salsa: A variant on pico de gallo, and this smooth salsa, which I like better.

Other than the xoconostles, which can be hard to find, this salsa is super easy: dried chiles, onion, garlic, salt.

What makes the salsa great is how you deal with all these ingredients. You roast them on a comal or in a cast iron or other heavy pan. Yep, you put the fruits right on the hot iron to char and heat up, then you let them steam in a plastic bag the same way you do when you char chiles to peel them.

Same goes for the chiles, onion and garlic. What chiles to use? I prefer chile morita, which are a smaller, fruitier, slightly less smoky kind of chipotle. Like a chipotle, they are ripe, red jalapenos smoke-dried.

You can, of course, use any of a variety of chiles. Some good alternatives, in order of preference, would be: chipotles; chile mixe, the smoky-spicy Oaxacan pasilla; toasted arbols; cascabels; chile puya; or, barring all else, plain ole’ guajillos. All of these chiles are dried. In a pinch you can use canned chipotles in adobo.

There is no substitute for the xoconostle, however. It’s its own thing.

The resulting salsa de xoconostle is smoky, spicy, smooth, luscious and tart. It is fantastic for tortilla chips, and I loved it spread on a plate alongside seared fish. I like it pourable but thick, but if you want a thinner salsa, just add water.

You can also see xoconostle in Central Mexican mole de olla, as well as sometimes in sorbet and in salads. I like it pureed into a vinaigrette for Mexican salads. 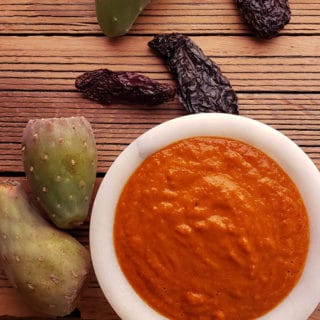