This beer began as pure experiment. It has become an obsession.

The entire reason I started brewing beer is to incorporate foraged elements into the brew. Mostly this means adding either wild adjunct grains, like wild rice, or botanical additions that contribute flavor. I do this with fresh, green fir tips in my fir tip ale, and with juniper berries in my NorCal gose beer.

Anyone who knows me know I love the aroma and flavor of juniper. Well, as it happens, juniper berries are coated in wild yeast. Yeast that can brew beer.

Working with wild yeast is an adventure. The bloom on grapes, plums and juniper berries is a clear indicator that wild yeasts are present (the bloom itself is not yeast, however, it’s a waxy substance that just tells you the wee yeasties are present.) Most fruits have yeast on them, as do most flowers.

Harvesting that yeast is as simple as dropping the fruit into something fermentable. Like beer wort.

I did this with some juniper berries I’d gathered in the high Sierra Nevadas. The same berries I made the gose from. Only this time I dropped them into a test wort — really some leftover I had from an experiment with a wild rice ale; that experiment continues. Sure enough, I got a nice ferment! It smelled nice, and I tasted the resulting beer, and it was good, even when flat.

So I ramped up the experiment and made a gallon tester batch. I added a bunch of chopped up needles from our local bull pine, Pinus Sabiniana, and when the beer was ready to bottle, a touch of 88% lactic acid I’d bought from the brew shop, as well as some oak chips I’d boiled first, so they would not add any other microbes to the party. Why? It just seemed right.

And it was. I brought Junipine to Sam Horne’s, a local beer geek bar in Folsom, California where I hang out at. I gathered some influential beer people: brewers as well as serious connoisseurs. Everyone thought this was my best beer yet.

Drinking this beer will transport you into a cool Sierra Nevada day. You can absolutely pick up both the pine and juniper. The yeast character is there, but not so strong as it is in, say, a saison. It is a largely red ale, hearty without being overly malty or hoppy. The oak is subtle, adding a little backbone and vanilla — but you’d never know it was there if I didn’t tell you. Finally, the lactic acid is not nearly enough to make this a proper sour beer, but it seems to amplify all the music coming from the glass.

Junipine is the best beer I’ve yet made.

Here’s how you can make your own version of a juniper wild ale.

To make a this wild ale, you need first to be set up for brewing. If you are, you’re good to go. If you’re not, there is equipment you need to do this right. At a minimum, you will need:

Estimated stats on this recipe:

Estimated Alcohol by Volume (ABV): 5.4%
IBUs: 25, but the pine needles and juniper berries will add additional hoplike bitterness and aromas
Original Gravity and Final Gravity: 1.055, going down to 1.016

To Make the Yeast Starter: 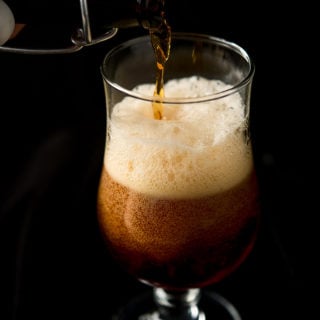 This is a red ale with moderate carbonation, a slight bit of tartness -- but not enough to make it a true sour -- and with strong aromas of juniper, with a backnote of pine. I am still primarily an extract brewer, but feel free to modify this to be an all-grain ale if you want to. One alternative in terms of malt is to use Munich instead of Maris Otter, which I did in the first incarnation of this beer. Note that the yeast on my juniper berries is slow and steady, so you should not need a blow-off tube.
Prep Time1 hr
Cook Time1 hr
Total Time2 hrs
Course: Drinks
Cuisine: American
Servings: 3 gallons
Author: Hank Shaw