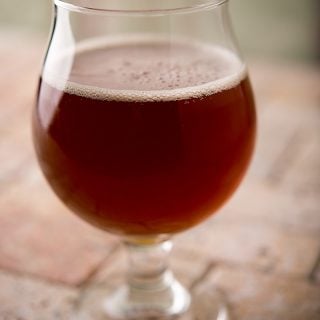 Spruce tip beer is, in one form or another, a very old style of beer. Back in Colonial times, hops were rare, so the colonists made a beer with molasses and used spruce or fir tips in place of the hops. This is not that beer.

This is a modern interpretation of a spruce or fir tip beer that is a rich amber ale with enough hops to give it backbone — and lots of fir tips, which lend a balsamic, citrusy flavor.

It is a wonderful beer to drink in a tulip glass, as you get all those amazing aromas full on; it’s like drinking with Vikings in the Northwoods.

What is a spruce tip? The brand new springtime growth of spruce, fir, redwoods, pines and other conifer trees is a pretty pale green. At first they are little compressed bullet-like structures, but as they mature they begin to look just like older growth, only lighter in color. You can use them at any point, and can even use older growth if you must, but the older the needles get the less citrusy and more turpentine-like they become.

Note that when I say springtime, I mean spring where the tree is. Where I live in Northern California, I can get the new growth of fir trees all the way into August, depending on how high I go. I picked some lovely Engelmann spruce tips in Arizona in late July. My advice is to gather a lot, vacuum seal them and freeze so you can make this beer all year ’round.

As for the foraging part, taste test many different trees, as each one will be slightly different. Then, when you find one you like, pick from that one — but not too much, as you don’t want to hurt the tree. And never, ever pick the growing tops of small trees. You will stunt them.

My main advice with this recipe is to age the beer a month or more in the bottles. It starts out harsh and bitter, but mellows wonderfully after a month and will continue to smooth out over time.

To make a fir tip or spruce tip ale, you need to be set up for brewing. If you are, you’re good to go. If you’re not, there is substantial equipment you really do need to do this right. At a minimum, you will need:

And, of course, you need malt and hops and yeast. Your nearest homebrew store will have all of this stuff, or you can buy it online.

I chose to make the beer rather dark because that’s what I wanted. But if you would rather make this a pale ale, add the extracts late in the process (they darken as they boil) or just go with a lighter grain bill. I chose the Northern Brewer and Saaz hops because I wanted something to play backup to the spruce tips, and because Northern Brewer’s flavor is pretty piney to begin with. They play nice together.

Here are the estimated stats on this recipe:

Fir and spruce are different plants, and have slightly different flavors, but both are citrusy, piney and, in high doses, bitter. Either works. You could experiment with chopped pine needles or juniper branches, too. This beer is pretty "hoppy," and I use quotation marks because some of that will come from the spruce or fir tips. Hard to determine exactly what the IBUs will be, but it'll be more than the 52 listed here. You can of course reduce the hops addition if you want a less pungent brew.
Prep Time1 hr 30 mins
Cook Time1 hr
Total Time2 hrs 30 mins
Course: Drinks
Cuisine: American
Servings: 3 gallons
Author: Hank Shaw

I like the mix of Scottish ale yeast with this beer, but any subdued ale yeast is fine. Avoid Belgian yeasts.
Tried this Recipe? Tag me Today!Mention @HuntGatherCook or tag #HankShaw!