Chances are you have never heard of a gose beer. Pronounced go-zuh, this is an obscure style of beer from Leipzig, Germany that just happens to be one of the greatest summer guzzlers ever.

Why? Because it is essentially a natural michelada: Instead of adding lime to the beer and serving it in a salt-rimmed glass, this beer is naturally a little salty and tart.

How you get there is up to you. Some brewers use acidulated malt, which is barley malt allowed to sour a little. Some sour their malt themselves, and some just add some food grade lactic acid to the finished beer. The salt goes into the boiling wort (sugary malted water that will ferment to become beer), as do any other spices.

My gose beer recipe hinges on where I live, in Northern California: I use salt I made by boiling away Pacific seawater, lemon rind from my backyard tree, and juniper berries from the Sierra Nevada.

The beer should be pretty well carbonated, light-ish, but not so light as a pilsener, and should have some wheat in it, which gives the beer a little bit of a softer edge.

To make it, you need to be set up for brewing. If you are, you’re good to go. If you’re not, there is substantial equipment you really do need to do this right. At a minimum, you will need:

And, of course, you need malt and hops and yeast. Your nearest homebrew store will have all of this stuff, or you can buy it online. And for the beer, you might want to pick up some food grade lactic acid

. In this recipe, you will get significant tartness from the acidulated malt, so taste the finished (albeit uncarbonated) beer before adding any lactic, OK?

This is not a hard beer to make, it is ready to drink in a month if you are using bottles, less if you are kegging, and it goes down real easy.

Here are the estimated stats on this recipe: 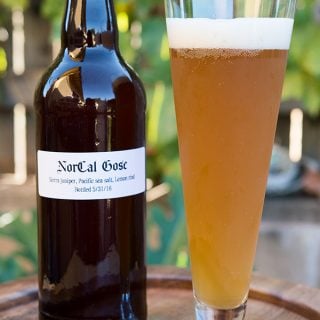 Typical gose beer recipes have coriander in them instead of juniper, so feel free to substitute. Another fun take is to switch out lemon rind for limes, and maybe add the juice of a couple limes in the secondary or at bottling to get a sort of "gin and tonic" effect. Bottom line when experimenting with this style of beer is that it should be light, slightly tart and a little salty -- this is a summer beer to pound down, so keep the alcohol level, IBUs and extra seasonings to a dull roar.
Prep Time1 hr 30 mins
Cook Time1 hr
Total Time2 hrs 30 mins
Course: Drinks
Cuisine: German
Servings: 3 gallons
Author: Hank Shaw