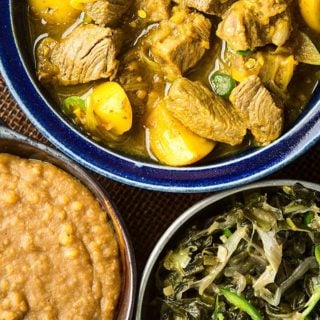 Alicha wot is one of those recipes from deep in the memory banks, back to 1993 when I worked at a restaurant called Horn of Africa in Madison, Wisconsin.

It was run by an Eritrean woman named Meselesh Ayele, and I came to be a cook there in the usual way: Hired as a dishwasher, our line cook skipped out one day and I was instantly promoted.

There are two main sorts of Ethiopian curries — and while they don’t call them curries, that’s what they are — red, intensely spicy ones, and yellow, not-quite-as-incendiary ones. This is the latter.

It’s called alicha wot, pronounced something like al-EETCH-a. Meselesh used to say this was the sort of food given to invalids, it was so mild. Given that chiles are not native to Ethiopia, and could have only arrived there sometime after 1500, and likely a century after that, I am amazed at how thoroughly the culture has adopted them. I can assure you this curry is not tame, if properly made.

Of course, you could make it so, by omitting all the chiles, but then the ghost of Meselesh (she died some years ago) would cackle down upon you, cigarette-hoarse and cutting.

It is a simple recipe. Lots of onions, garlic, ginger, meat. Our version always had potatoes in it, another New World adoption. I wonder what, if any, local tuber they would have used in Ethiopia?

The only odd ingredient, actually, is the butter you need to cook this stew in. Called niter kebbah, Ethiopian spiced butter is what makes their cuisine taste of itself. There is no substitute, but here is my recipe for niter kebbah, and, once made, it will keep for months in the fridge, or forever in the freezer.

I am using well-trimmed venison stew meat here, but we used either lamb or beef at the restaurant.

On a weeknight, you can serve your curry with rice. But if you want to really put on an Ethiopian spread, the side dishes really add a lot. I have some suggestions for sides in the recipe notes below. 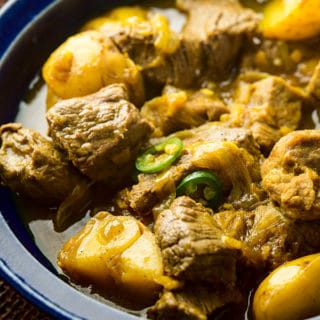 It's been years since I worked at an Ethiopian restaurant, but this recipe for alicha wot is pretty close to what I remember making back in the day. I use venison stew meat here, but beef or lamb will work, too. This basic curry is also used with chicken, and even fish.
Prep Time20 mins
Cook Time2 hrs
Total Time2 hrs 20 mins
Course: Main Course
Cuisine: Ethiopian
Servings: 4 people
Calories: 492kcal
Author: Hank Shaw