While rabbit is not nearly as popular in Mexican cooking as, say, chicken or pork, you do see recipes for conejo en adobo, more or less rabbit in a red (or green) chile sauce, all over that country.

This recipe is from Tamaulipas, in northeastern Mexico, and is a great, simple way to serve rabbit with a Mexican flair.

Typically you would use farmed rabbit for conejo en adobo, but cottontail rabbits or squirrels would be good, too. And chicken thighs would be a nice substitute from the supermarket.

A recipe for conejo en chile rojo in the cool (but hard to find) book Cocina Familiar en el Estado de Tamaulipas inspired me to make this dish, which is an amalgam of that recipe plus a bunch of others for conejo en adobo I’ve read online and in other Spanish language Mexican cookbooks.

Basically you make rabbit broth to cook the animal, then use some of that broth for the adobo. The adobo is a lot like a simplified mole sauce, with several chiles, onion, garlic and tomato, plus a little Mexican chocolate and some spices.

It reminds me a a simpler mole coloradito or chirmol sauce, both of which are from southern Mexico, not the north as this is. It’s a great sauce, useful on way more than just rabbit, so keep some in a jar in the fridge, where it will keep about 10 days or so.

A couple things will make your conejo en adobo better: Real Mexican oregano and real Mexican chocolate. I grow my own Mexican oregano, but Rancho Gordo sells some really good stuff, when it’s in stock. Most Latin markets will sell it, too. As for the chocolate, sure, Abuelita brand will work, but there are all sorts of better Mexican chocolates out there that are less sweet and processed; do an Amazon search for them.

Serve this as is, with beans and rice, or pull the meat off the bones and serve your conejo en adobo as a kick-ass burrito filling, or put it in Mexican empanadas, or serve it on homemade flour tortillas. Why flour? Because this is from the north, where flour is king. Homemade corn tortillas are fine, too. 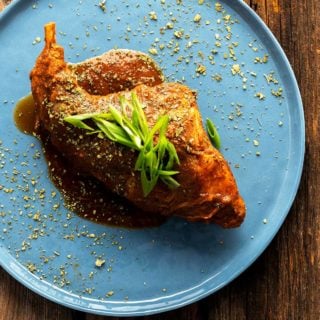 NOTE: You will have sauce left over, which will keep a week or more in the fridge and is great with pretty much any meat, as well as oily fish, or beans.