File Mexican chirmol sauce as one of those damn cool things you can make from random ingredients. Chirmol is basically a simplified mole, which is a good thing since mole can be an all-day affair.

Chirmol is not. Pronounced “cheer-moll,” it is a specialty of the Mexican state of Tabasco. Keep in mind this is not the Guatemalan version of pico de gallo, which is also called chirmol.

It hinges on chiles, ground up pumpkin seeds, tomatoes, onion and garlic, as well as various herbs and spices. You will also want some stale tortillas or tostadas lying around.

This sauce is very often paired with crab, which is what I did here. I used Dungeness crab, a) because I had it, and b) because the original dish calls for cangrejo, not jaiba. In Latin American Spanish, cangrejo is typically a walking crab, often a land crab, where jaiba is basically the blue crab we see in the Chesapeake and the Gulf. That said, the crab police won’t come to your door if you use blue crab.

No crab? Well, chirmol is great on basically everything. I’ve seen it put on beef, chicken and pork, as well as lobster and fish. So yeah, have at it.

The core of my chirmol recipe is from the book Cocina Familiar En El Estado De Tabasco, which can be hard to find. I’ve also seen other versions here and there, and this is an amalgam of them all.

There are a few unusual ingredients in chirmol to make it truly authentic, but I’m listing these as optional because not everyone has, say, hoja santa lying around.

Once made, chirmol will keep in the fridge for a couple weeks. It also freezes well. I like to triple this recipe, so I can have pint tubs of it in the freezer for when I happen to have crab… or pheasant, turkey, venison, etc., etc. Like I said, this stuff is great on everything! 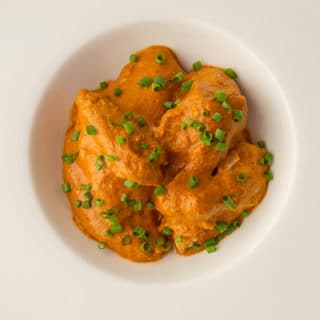 This is the Mexican rendition of chirmol, not the Guatemalan salsa. It's from Tabasco, and goes well on pretty much anything. I typically serve it with meat or fish alongside simple rice.
Prep Time45 mins
Cook Time20 mins
Course: Appetizer, Main Course, Sauce
Cuisine: Mexican
Keyword: crab, sauce
Servings: 6 people
Calories: 356kcal
Author: Hank Shaw