I am in love with this recipe for Mexican chicken with walnut sauce not only for its rich, complex flavor and for how easy it is to make, but also for its story. Gallina en nogada, in various forms, dates back at least to 1808.

It all started when my friend dropped off a bunch of pomegranates. I immediately thought of the Mexican dish chiles en nogada — a stuffed poblano with a white walnut sauce, decorated with pomegranate seeds.

I knew that in the Mexican state of Chihuahua there exists a variant called gallina en nogada; a gallina is a hen in Spanish. As it happened, Holly had just returned with some pheasants she’d shot in Kansas, and pheasants are an excellent stand-in for an old stewing hen. Perfect!

Or not. I soon realized that gallina en nogada is a very different dish from the white sauce that goes over the poblano chile version. First off, it’s not white. Second, no pomegranates. Oh well.

So down the rabbit hole I went.

I can read Spanish, so I searched my library of Mexican cookbooks and found a few renditions, mainly from Chihuahua and Veracruz. They all had chiles and some had tomatoes. Interesting.

Then I realized that gallina en nogada — “en nogada,” by the way, simply means “in a walnut sauce” — was very old. The University of Texas at San Antonio has a collection of antique Mexican cookbooks, many handwritten, digitized and online.

A search of that collection turned up a rendition of the dish dating back to 1808, even before Mexico was independent. The book is Libro de Varios Guisados, Antes, y Postres by Doña Maria Ramona Quixano y Contreras.

The recipe is short: Translated, it is walnuts, garlic, and cumin ground in a mortar and pestle, fried in lard in a cazuela. Chicken and its broth are added, it’s cooked until the chicken is tender, adding a little vinegar and parsley at the end.

No New World ingredients at all. The recipe feels Catalan, or even Moroccan. Then in 1828 a recipe appears that is even more Moroccan sounding, with the addition of cinnamon and cloves.

It’s not until 1845, in Diccionario de Cocina, Nuevo Cocino Mexicano by Mariano Galvan Rivera, that you see charred tomatoes enter the recipe.

This makes sense, because as Mexico coalesced into a nation after 1810, it began to embrace the indigenous side of itself, and you see a gradual mix of Spanish with indigenous ingredients and techniques.

Nowadays, gallina en nogada resembles a simple mole coloradito, or a pipian rojo, only made with walnuts instead of sesame seeds or pumpkin seeds.

Enough about the history. On to the recipe.

The nogada, the chile walnut sauce, is easy to make, and it keeps for a week or two in the fridge. There are no ingredients you can’t find either in a Latin market or a regular supermarket — I’ve seen ancho chiles in Walmart — so that shouldn’t stop you.

As for the gallina, obviously you can use regular chicken here. I used those pheasants from Kansas. Other options would be partridges, Cornish game hens, quail, rabbits or turkey breast.

All you need to do to make the dish is to gently simmer the chicken or whatever to make a broth — or use pre-made broth and skinless breasts — then use that broth to help make the sauce, which comes together in a blender.

Pour the sauce over the meat, garnish with parsley and call it a day. Easy peasy.

The flavor of gallina en nogada is lush. Only vaguely spicy, rich from the walnuts and the lard you fry the sauce in, with a hint of char from the onions and garlic and tomatoes. It’s addictive.

You will likely have leftover sauce. Use it on roasted potatoes, or toss shredded meat with it and make enchiladas or burritos, or to fill Mexican sopes or masa empanadas. It is also amazing with roasted squash. 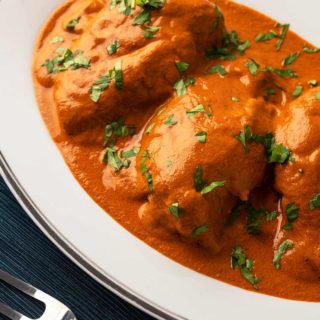 If you are using only skinless breasts of chicken or pheasant, use 1 quart of premade broth to poach the meat in. Bring it to a boil, drop the breasts in, let this return to a simmer, then turn off the heat and cover the pot. Let this steep for 15 minutes.