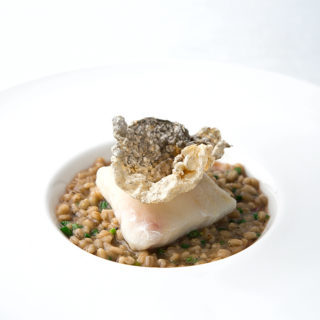 To me, a perfect dish is a plate of food that epitomizes a particular time in a particular place, an edible memory of an experience, whether good or bad, painful or blissful. At its most basic, this is the trout you catch at dawn and eat, fried in bacon fat, for breakfast later that morning. At its most complex, it’s the food of renowned Danish chef Rene Redzepi of NOMA.

The food here at Hunter Angler Gardener Cook lies somewhere in between. Whether you call it “experiential cuisine” or terroir or whatever, I’ve been trying my best to make food like this for years — not every day, and with varying success.

I have notebooks filled with deeply thought-out recipes that just didn’t work. Some looked a lot better than they tasted. Some tasted fine, but were essentially a bunch of shit on a plate, not a cohesive dish; put fried chicken, lobster and a ribeye on a plate and it’s great, but it’s not a dish. Catch my drift?

Walleye Minot is one of my successes. It came out of a day of fishing on Lake Sakakawea in North Dakota, halfway between Bismarck and Minot, on a pretty autumn day in October. I was the guest of the North Dakota Tourism Department, fishing with Tourism’s Mike Jensen and pro walleye angler Jim Carroll.

Mike picked me up early, and as we drove north from Bismarck, we passed a lot of grain fields, mostly wheat, barley and sunflowers. Duly noted. And when we got to the lakeshore, I saw all these scarlet berries everywhere.

Buffaloberries! They are a very tart, tannic berry in the shepherdia clan that are sweeter after frost. I picked a few handfuls and stuffed them into my pocket.

Lake Sakakawea is a crazy lake. It’s an immense reservoir that stretches from the western oil shale boomtown of Williston all the way to the center of the state, almost 500 miles. And being in the Great Plains, it’s not a typical tree-lined lake you’d see in California or Minnesota or Maine. Its shores are stark, almost barren — at least they look that way in October.

And see that black line? That’s lignite coal. Lewis and Clark first found it here on their way through to the Pacific back in 1804. It burns, but not well, so here on the lake the coal is essentially just a cool racing stripe ringing the shoreline.

Jim took us out to a spot he thought might be good. Unfortunately, it was a classic case of “you shoulda been here yesterday!” Fishing was slow. Real slow. But not entirely so. Jim caught a really nice walleye in the 6 pound class, plus a smattering of nice white bass. We released the walleye but kept the bass.

For the most part we were jigging lead-heads with curly tails on them, or fishing with live minnows. A few hours after Jim had caught his walleye, I was in the middle of telling a fish story when my rod bent with the weight of a nice fish. Had to be a walleye. Walleyes, if you’d never caught one, aren’t the most thrilling fish in the world to catch. Once hooked, they rarely make slashing runs and never jump. But they sure taste good. Jim netted my fish, and it was a good one!

Jim guessed about 4 to 5 pounds, and while he would have released it, I did not. It would be the basis of this dish that was beginning to coalesce in my head. We didn’t catch any more keepers that day, but it was a much-needed day off from the book tour.

The next day I drove to Fargo for another book event. I was thinking all the way about the dish. My first thought was to make a fish risotto the way they do in Venice, but North Dakota is pretty much as far from Venice as you can get, both culturally and geographically. But… barley makes a nice risotto! And hell, I was driving through thousands of acres of it at that moment.

I decided I would make this dish as a hat tip to everyone in North Dakota who helped me so much — NoDak was definitely a highlight of the fall tour — and as a thank you to my friends in Minnesota, Chris and Di, who were putting me up at their house for a few days. I’d cook it there.

Sitting in the back of my truck was a bottle of buffaloberry syrup that my friend Beth Schatz-Kaylor of Rhubarb and Venison had given me. I decided to make a sweet-hot-sour gastrique with it to brighten everything up. By itself, the syrup tastes like the illegitimate love child of a cranberry and a peach. I added some malt vinegar, salt and chile to balance it.

Walleye is your quintessential lean white fish. It is a blank slate. So I filleted the fish (along with the white bass, which are similar), skinned the fillets and portioned them out all pretty. I oiled the bones and heads with sunflower oil and salted them, then roasted the crap out of everything until it was well browned: If you’ve never tried this, brown-roasting fish bones takes longer than you might think because there is so much water in them. The stock I made from these roasted bones was unlike any fish stock I’ve ever made. It was so, well, roasty, it did not even taste like fish. A galaxy apart from a typical fish fumet. This is what I would use to cook my barley risotto.

As for the fish, I salted the meat for an hour, then poached it very gently in butter. Yeah, it was a lot of butter, but who cares? That left the skin. Nope, I did not toss it. Instead, I made walleye skin chicharrons using this method.

The result: An incredibly flavorful barley risotto, topped with sweet butter-poached walleye, ringed with a little zippy buffaloberry sauce and topped with a light and crunchy fish skin chicharron. Virtually everything in it was living in or around Lake Sakakawea on that day in October. I used no foams or molecular techniques to make this dish, but nor is it just a simple plate of fried walleye.

I am pretty proud of this recipe, and I hope you give it a go — and as you will see in the recipe below, it’s basic structure will work no matter where you live.

If you live in North Dakota or wherever buffaloberries and walleye coexist, by all means make this recipe as-is. But most of you do not. So here’s my advice: 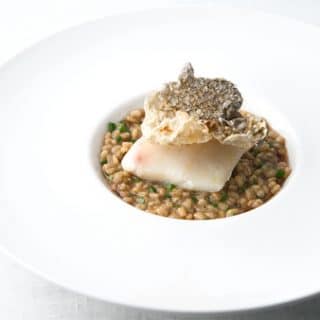