Everyone says they have the best venison chili, but this really might be it. This recipe is the One Ring of chili, no matter what meat you use. It has won more awards than I ever imagined it would, and if you scroll through the comments you will see reader after reader who has won contests and awards with this recipe.

So yeah, I am pretty proud of my venison chili. It’s been on this site since about 2008, and while I’ve tinkered with it over the past decade-plus, it’s heart has remained the same.

And after all, who doesn’t love chili? And what hunter doesn’t love venison chili? Chili has endless variations: Beans or no beans? Ground meat or chunks? Or no meat at all? Tomato products or no tomato product? Add coffee? Chocolate? Cinnamon?

In fact, so far as I can tell, the only things that really must be in a venison chili recipe to make it a proper chili are chiles of some sort, cumin, and onions. (Yes, there are vegetarian chiles out there.)

My version of venison chili hinges on ground deer meat, but I’ve made it with all kinds of meats, even ground turkey and goose. You can use any meat here. I’ve done it with diced venison or other meat and it’s good, too. Just don’t do large chunks; the texture of the chili will be off.

I find that the chorizo, which is kinda runny, is a perfect start to the chili, as it’s often very fatty. Bacon works great, too.

The Chiles in Venison Chili

What makes my venison chili unique is the amount of dried chiles I use.

I will typically use 12 to 16 dried chiles of all sorts, reconstituted and then pureed with a cup of weak coffee to make the backbone of the dish. Any variety of these chiles works, but remember to use mild ones, at least mostly.

My preference is to use lots of anchos, which are very dark, mild and raisiny, with some guajillos, which are bright red, fruity, and are a bit hotter. None are really hot.

Don’t get all hung up on an exact combination of dried Mexican chiles. My advice is to use at least 3 or 4 kinds of chiles if you can. Other options besides ancho and guajillo would be a mix of chipotle, puya, chile negro, chile mulato, cascabel, New Mexican, red Anaheims and pasilla chiles. As you get to know these chiles — some are smoky, some hot, some sweet — you can adjust the mix to your taste.

I like beans in my chili, but you can skip if you feel strongly about it — talkin’ to you, Texans! You can also use canned beans, and if you are, add them towards the end of cooking. Be sure to rinse the canned beans before adding to remove some of the starchy liquid they’re canned in.

What beans? Ideally pinto beans or something like it. Some sort of brown bean fits well with venison chili. I do have a black bean turkey chili recipe, where the black beans are a star of that show, so feel free to use black beans here.

White beans would seem weird, though, at least to me.

Yep, this will work with either, although in both cases you would want to sauté everything first normally and then set it in the pressure cooker or slow cooker.

Slow cooker venison chili should take about 4 to 5 hours on “high,” and 8 hours or more on “low.” I’ve found that sautéing everything the night before, popping it in the fridge overnight, then putting it all into the slow cooker in the morning before work is the best and easiest course of action.

For the Instant Pot, you’ll want to put everything in after sautéing and set it on High Pressure for 10 minutes, then doing the natural release.

I am partial to Mexican toppings like radishes and cotija cheese, which is a lot like feta, as well as cilantro and green onions.

But hey, venison chili is an American thing, and so I have to give a nod to shredded cheddar or jack cheese, plus yes, Fritos. I know, I know, but they are every bit as good in chili as tortilla chips.

Jalapenos, pickled or fresh, are a great option, as is minced onion soaked in lime juice. Diced avocado is a nice touch, too.

Sour cream is a natural, especially if you let your venison chili get too picante — and if you didn’t, your favorite hot sauce will then come in handy.

Bottom line: Put whatever makes you happy on top of your venison chili. You do you.

Once made, it will keep for a week in the fridge, and, if you skip the beans, it freezes well. You can still freeze venison chili with beans in it, but the texture suffers a little.

You can also pressure can it in pints for 75 minutes at 10 psi (higher if you live at altitude). Check here for the food safety rules for pressure canned chili.

This venison chili is super Tex-Mex. If you want something a little more Southwest, go for my chile colorado recipe. 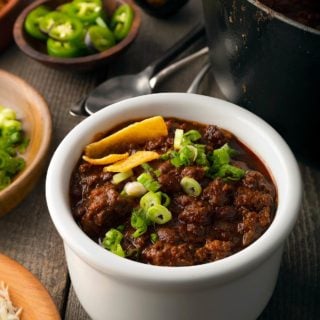 This is my version of venison chili. It does involve several items you don’t often see in chili, like molasses and coffee, but I’ve been modifying this recipe over the years to the point where this is what I like. Serve this over rice or polenta, garnished with cilantro and maybe some Mexican queso seco, jack cheese or American cheddar.
Prep Time30 mins
Cook Time3 hrs
Total Time3 hrs 30 mins
Course: Main Course, Soup
Cuisine: American
Diet: Gluten Free
Servings: 12
Calories: 426kcal
Author: Hank Shaw

If you want to go full Mexican here instead of Tex-Mex or Southwest, try my recipe for chile colorado, which is a lot like chili, but is more authentically Mexican.