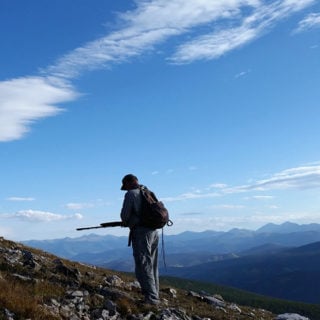 Keep going. One foot after another. Breathe. Don’t look up.

We’d been climbing this mountain for over an hour, more or less straight up. Any more vertical and we’d need climbing gear. Jim had warned me about this hunt months ago, and I’d taken that warning seriously; all summer, I’d hiked as much as I could in the High Sierra before arriving at this peak, somewhere near Breckenridge, Colorado (the exact mountain shall remain nameless).

But those summer hikes had topped out at 10,000 feet: This time, we parked the truck at 10,000 feet and walked up from there. Each step took me higher than I’d been all year, and here, near the top, I’d reached altitudes I’d only experienced before in the pressurized cockpits of planes.

It was too much for Jordan. Jim, although he lives in Kansas, is from Colorado. Alex is from Wyoming. Both High Plains states. Jordan, not so much. “I don’t feel good, guys,” he said. How not good? Headaches, woozy, dizzy. Altitude sickness. We sat for a moment, debating. Here we were, almost there, but still with at least 500 feet, maybe 1,000, of vertical climb still to go.

Jordan wanted to go on, but Jim’s been here before. “You’re not going to feel any better farther up. And altitude sickness can be serious.” Reluctantly, Jordan swallowed  the inevitable and descended, a casualty of the climb.

I finally looked up. Almost there indeed. The treeline was close. And above the treeline lived what we sought: white-tailed ptarmigan.

Lagopus leucura is native to the Rockies, but have been introduced to the Sierra Nevada, Wallowas and Uinta mountains; they’re far more common in British Columbia and Alaska. White-tailed ptarmigan are the only bird that lives permanently in our alpine regions. And it’s the smallest grouse in North America, closer in size to a partridge than it is to its other grouse cousins. A single-serving bird for sure.

But it’s bad luck to count your ptarmigan before they’re in the bag. In the tundra of Alaska and Canada, hunting ptarmigan is legendarily easy; they’re frequently killed with a well-placed rock. Up here in the Rockies, they fly harder and faster, but still the hunt is more about finding birds than shooting them.

Jim was confident. This was his honey hole, a place where he’d shot birds for several years. Not a ton of birds, to be sure, but any ptarmigan is a trophy. We walked on.

We were pleasantly surprised at the good cheer we received from passing hikers, who were en route to the mountain’s 14,200-foot summit. What are you hunting? they’d ask. Ptarmigan. Really? That’s cool. Do you eat them? Of course! But this is probably the most calorie-negative hunt in the world. They’d laugh and wish us good luck.

I’d been anticipating this hunt all year. It was the opening hunt of our Great Chicken Chase 2017, an attempt to shoot (and later eat) five species (or subspecies) of grouse in five days: ptarmigan, Columbian sharp-tailed grouse, blue grouse, sage grouse and the common sharp-tailed grouse.

All of us had debated the sanity of starting with ptarmigan over dinner the night before, and came to the conclusion that this was in fact the only way to do it — with fresh legs. A few days later, Alex said, “If you asked me to climb that mountain tomorrow, I’d hide in the truck.” We all agreed.

Finally, we were there. A world of rock and angles. Boulder fields. Scree. Tufts of alpine grass here and there. No trees. Not even gnarled krummholz or flag trees. And nothing was flat.

We started walking through a boulder field when Jim spotted something: “Right there! Birds in front of us!” I couldn’t see them. Jim could, and told me to get ready and walk forward. I told him it’d do me no good to do that if I couldn’t see the birds. Jim was getting agitated; he wanted me to get a ptarmigan in the worst way. So did I, but I didn’t want to botch a chance because I couldn’t see the damn birds.

Apparently our arguing set the birds on edge, because I finally saw one move. Whoa… If you’ve never seen a ptarmigan’s camouflage, it is astonishing. No time to contemplate that. Walk forward. Watch. Wait for it… wait…

The covey flushed. All three of us fired. I missed my first shot, tracked a bird flying left to right, crystalline blue sky behind it. Butt, belly, beak, BANG! The bird folded.

I focused on where it fell and rushed towards it. Alex’s Lab Zoe and Jim’s wirehairs, Jazz and Zooey, dashed around, looking for fallen birds.

Another flush! Again, left to right. I shoot — it falls. Two birds!

Just then Zoe the Lab brought me back my first bird. She flushed yet another ptarmigan! I shot that one, too, and it fell not five yards from me.

I felt woozy, and it wasn’t altitude sickness.

Ever since I’d started hunting, I’d been fascinated by ptarmigan. They seemed so exotic, so far away. Tundra birds. Birds of impossible alpine regions. Beautiful beyond words. All year I’d hiked at altitude just so I’d be fit enough to do this hunt. All I wanted was one bird, and here I had a full limit of three!

I felt like an Olympic sprinter, who trains and trains, travels thousands of miles, all for an event that lasts seconds. But, medal in hand, those seconds will forever hold a golden place in the halls of memory. My head almost split in half I was smiling so wide.

Jim came over. He was beaming, too. He shook my hand: “Do you know how happy I am that you got birds?” I did. I’ve guided friends before, and the pressure for things to go right is intense. Now it was all gravy. Jim and Alex each had a bird, I had a limit. We should have quit there while we were ahead.

We walked on, in search of four more birds for a three-man limit. I soon learned that hunting alpine ptarmigan isn’t just a battle against thin air, although that is not insignificant. It’s also a battle for secure footing.

Scree fields were a no-go, as you’d slide backwards horribly with every attempt at a step. Boulder fields were easier. I’d hop from boulder to boulder much the same way I’d rock-hopped jetties at the beach for decades. The skill never leaves you. But always, my feet would seek grass. Anything not rock, anything stable.

Pika were everywhere. If you don’t know what they are, pika are the Most Adorable Creature on Earth. Micro bunnies that are the inspiration for the cartoon character pikachu. Cute, squeaky varmints scurried this way and that, doing pika things in their pika way.

They didn’t seem overly worried about our presence.

I’d long given up on being able to see ptarmigan before they flushed. Their feathers are, like those of the sage grouse, incredibly well matched to their surroundings. They looked exactly like the pattern of quartz and granite and lichen that was all around us. But hell, I was done shooting anyway, so I could afford to relax a little.

Upward we hiked, until we reached about 13,000 feet, my personal record for altitude. Hiking is a term I use loosely, as each step took effort, and with the thin air we stopped often to gather ourselves. Still no more ptarmigan. After a few hours of this, we decided we’d had enough and turned back toward the truck.

That’s when I discovered that walking down a mountain can be worse than going up. The prospect of slipping and falling and breaking an ankle or knee or whatever pushed out all other thoughts.

Painstakingly we traversed the side of the mountain, back toward trees and a clear path.

Jim, Alex and I were spread out wide; they’d still hoped for birds. A shot rang out. Two. I saw bird fold below me. Alex had shot his second, making our total six birds.

Finally, the trees. Still more than an hour’s downhill hike ahead of us. Footsore, blistered and utterly exhausted, we eventually made it back to the truck. 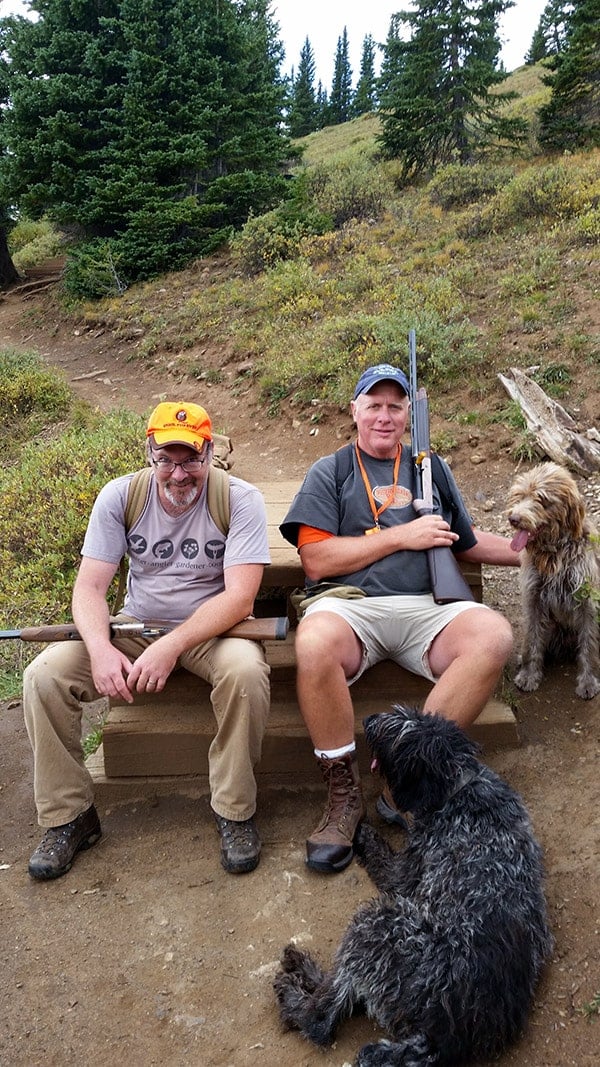 Only with my boots off and a quart of water in me could I begin to grasp how important this morning had been. I’d gone higher than I’d ever been, shot well, and crossed a bird off my bucket list I’d been wanting to hunt — and eat — for more than a decade.

With six ptarmigan to play with (Jim and Alex donated theirs to the cause), I can’t wait to explore these birds in the kitchen. Ptarmigan are all dark meat, like a pigeon or duck and unlike their larger cousins the sharpie and sage grouse, which have light-meat legs. They are funky as all grouse are, and their crops were stuffed with blueberries, the tips off spruce and pine, as well as some catkins from, probably, willow.

I plucked four, and found them easy to pick compared to quail and ruffed grouse. But, as with all September birds, they had a lot of pinfeathers. Miraculously, none were shot-up or mauled by the various dogs, so they’ll look good on the plate.

How to cook them? Well, you’ll have to wait for that one. Look for the recipes in my next book, Pheasant, Quail, Cottontail: Upland Birds and Small Game from Field to Feast