This recipe can be as simple or as complex as you want to make it.

At its core, this is squirrel carnitas. You can make that part of this recipe and serve it however you’d like. But this dish as a whole, which I call Arizona Gray, is an absolute knockout. It is quite possibly the best Mexican dish I’ve ever created. But it’s neither simple nor quick.

Let’s start with the squirrel. I call the dish Arizona Gray because that’s what I used to make it with: Sciurus arizonensis. It only lives in Arizona, small parts of New Mexico, and Sonora in Mexico.

I managed to shoot one in a full-on blizzard near Sierra Vista in southeastern Arizona, and it was the second-to-last squirrel I needed to get to earn myself the Squirrel Slam. Incidentally, I think I may be only the second person to hunt and eat all eight legal species of tree squirrel in America; my friend and Squirrel Hunting Yoda Johnathan O’Dell is the first.

Given that we were basically 25 miles north of Mexico at the time, I reckoned I needed to make a Mexican dish, much as I did the pipian rojo with the Mexican fox squirrel I shot in the Chiracahua Mountains not far from Sierra Vista. Squirrel carnitas was a natural choice.

To make it, I salted the squirrels overnight, rinsed them and then packed them into a vacuum bag with lard, a few hot chiles and some avocado leaves. Avocado leaves are used like bay leaves in that they are aromatic, a little anise-y. You can use bay leaves instead.

You then cook the squirrel in a big stockpot of steaming water for a few hours. You can also skip the vacuum bag and simply submerge your squirrels in lard and cook them in a 225°F oven for about four hours.

Once the squirrel is tender, shred it off the bones. Use some of the lard to coat the bottom of a frying pan, ideally cast iron, and sear just one side of the squirrel, hard. This makes your squirrel carnitas both crispy and meltingly tender.

Serve this in a burrito, on a taco, or however you’d like. I made huaraches, which are named for sandals and are a sandal-shaped masa cake stuff with pureed beans. And of course I had to use a blue-gray masa, right?

Over the huaraches, I spread some mole I’d made — you can use either the recipe for mole chichilo or my turkey mole — and mixed the squirrel with slow-cooked tepary beans, which are a wild bean native to Arizona.

A little Mexican cheese and crushed wild chiltepin chiles and there you have it. A worthy meal from a memorable hunt. 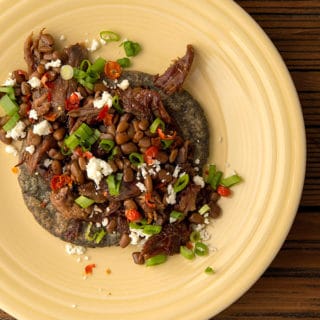 I'm going to give you just the recipe for the squirrel carnitas, largely because you would need a fair number of unusual ingredients and the skill to make huaraches at home to make the full Arizona Gray. Any squirrel or rabbit will work here, and of course this is pretty much how pork carnitas is made in Mexico, too.
Prep Time15 mins
Cook Time3 hrs
Brine time8 hrs
Course: Appetizer, Main Course
Cuisine: Mexican
Servings: 4 people
Calories: 570kcal
Author: Hank Shaw

NOTE: I only use freshly rendered lard here, not the shelf-stable stuff, which is bad for you. Duck fat is another good choice, but you can easily find manteca, the Spanish word for lard, in any Latin market.