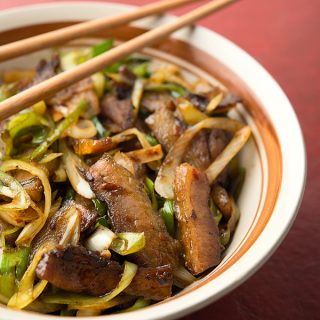 Chinese twice cooked pork belly is one of those little luxuries. It is a Sichuan dish where you first simmer pork, usually pork belly, until it’s tender, then you stir-fry the pork with leeks and black beans.

I had never even heard of twice cooked pork belly until about eight years ago, when a new Chinese restaurant opened up down the street. I wandered into the Sichuan Spice House wondering what, if anything might be good there.

When I opened the menu I was astonished: Tripe. Spicy wontons. Lamb with cumin. Crispy fish served whole. And this twice cooked pork belly. Wow. Real Chinese, I thought. When the food came, I was stoked: Real-deal Sichuan cooking in my little neighborhood!

Since then I’ve eaten their twice-cooked pork belly probably a hundred times. Fatty yet meaty. Super savory from black beans, all brightened by lots and lots of leeks.

What I like the most is that the cook decided to use even the tougher green part of the leek, which most cooks use only for stock; the green parts give the dish a contrast in texture and are stronger in flavor than the white parts, as you might expect.

The process of making double-cooked pork renders out a lot of fat, so even though it’s pork belly, it is not as fatty as, say, red cooked pork belly. Plus, you then stir-fry sliced until they are nicely browned.

Mostly you will be using farmed pork belly here, but I have used belly meat from wild hogs and bear, too. If you can’t get belly, the fattiest parts of pork shoulder will work in a pinch.

My recipe is an amalgam of several, but I am especially indebted to my friend Kho Kiam Lam over at the Red Cook blog. His website is a treasure trove of real-deal Chinese recipes.

Serve your twice cooked pork belly with steamed rice and a beer. It reheats very well, too, and will last a week in the fridge. 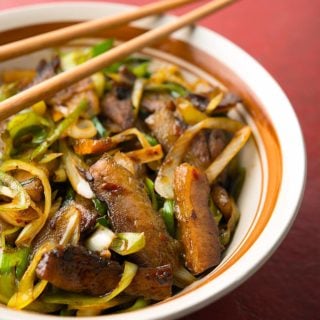 Cooking twice-cooked pork belly with a wild pig is a little tougher (literally) than if you use domesticated pork belly. Most recipes call for boiling the pork belly for 20 to 45 minutes, but that won't work with wild pigs. Instead, I cook the boar belly in steaming water -- not boiling -- for 60 to 90 minutes, to help break down the connective tissue in it. Keeping the temperature lower prevents all the fat from boiling out of the belly.
Prep Time15 mins
Cook Time2 hrs
Total Time2 hrs 15 mins
Course: Main Course
Cuisine: Chinese
Servings: 8 people
Calories: 966kcal
Author: Hank Shaw

You really need the black bean sauce to make this dish -- many good supermarkets carry it.