For many of you, the idea of a shark recipe borders on the immoral. You are half right.

A great many sharks are indeed overfished, some to the point of being officially endangered. And the barbaric practice of “finning,” where people slice the fins off live sharks, tossing the gasping, helpless fish back into the ocean, needs to be banned worldwide. (It already is in America.)

But there are lots of shark species that are doing just fine, and indeed there are healthy recreational fisheries for them on all our coasts.

And, according to Seafood Watch, which monitors the sustainability of commercial fisheries, several species you can buy in the store are listed as “Good Alternative,” and dogfish caught by trawling on the West Coast is even listed as a “Best Choice.”

For us in the West Coast, we mostly catch soupfin sharks, dogfish and leopard sharks, with the occasional thresher and seven-gilled shark here and there. Easterners will be most familiar with dogfish, bonnethead sharks, lemon sharks and occasional bull sharks. All can be amazing table fare, none are threatened or endangered, and all can be used for this shark recipe.

Anglers reading this need to think about fish care. After all, many sharks can stink of ammonia if poorly handled, rendering them unfit to eat. This is what you need to do if you want to eat a shark you catch:

I happen to love catching and eating leopard sharks, although I only do it once or twice a year, and I don’t keep females. I firmly believe in wise use of this resource, so we can all keep catching sharks long into the future.

Why bother eating sharks? Because their meat is, well, meaty. Very firm, snow white and savory in the way the meat of a striped bass is. Shark loves to be fried.

Which leads us to this shark recipe.

This is a knockout dish. I read about something called tiburon con pasas y pinones in Calvin Schwabe’s classic book Unmentionable Cuisine. That book has no real recipe, just ingredients. So I made it up from there. The dish Schwabe describes has both pine nuts and raisins in it. I don’t much like raisins, so I left them out. You could put 2 tablespoons in if you’d like.

The texture differences between the shark chunks, the fresh tomatoes and the pine nuts makes this recipe interesting, and I love the way the flavors play with each other.

Have everything ready before you start this dish, as it comes together fast. Serve with saffron rice, potatoes or just crusty bread. White wine is a must with this, although an ice cold pilsner would be good, too.

Looking for another great shark recipe? Try my Italian “glutton’s style” fish, which is great with shark. 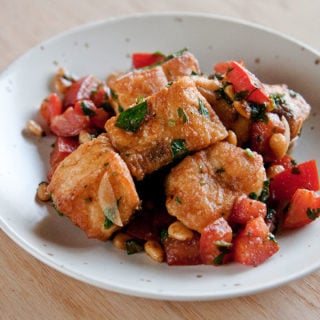