Beer battered fish and chips are a necessary part of human existence, and I am here to help you perfect this classic.

At some point, all of us have sat face-to-face with a pile of English fish and chips or fried clams. As this usually happens first when we are tiny tots, the experience can alter the course of our dietary existence: After that virginal fish fry, many of us we emerge either as committed fish lovers — or, like many Americans, committed fish haters.

Only about half of Americans eat seafood more than once or twice a year, and I suspect that a big reason for such a gulf between fish eaters and fish haters is what was on that first plate of beer battered fish and chips. Try to think back to your childhood now: Did your mom cook her own fried fish, or did she open a box and shake out a few frozen fish sticks?

I have vivid memories of both cases. My mom cooked her own fish. I have a crystalline image in my head of mom busily making fried flounder. It must have been the mid-1970s. She’s standing next to a pile of flounder fillets, each layer separated by paper towels sodden with oil. We’d eat these with lemon and lots of “tah-ta sauce.” Mom is from Massachusetts.

I also remember eating at some of my friends’ houses. That image is of pre-breaded fish sticks clunking out onto a foil-lined tray that somebody else’s mother popped into the oven, often a toaster oven. I remember these being dreadful.

But neither of these are beer battered fish and chips. These, for most of us, are only eaten at restaurants. Here’s how to make them at home. Correctly.

English fish and chips may be that nation’s culinary gift to the rest of the world, although the English are experts at roasting large pieces of meat, too. Let’s start with the fish.

Best Fish for Fish and Chips

I’ve eaten beer battered fish and chips six ways to Sunday, but all the best share a few characteristics: They’re all firm, white, and lean — and of course skinless and boneless.

Cod, haddock and pollock are classics in the East, as is halibut, rockfish or lingcod in the West. In Wisconsin and Minnesota, walleye and yellow perch are king. In the South, it’s all catfish until you get to the Gulf, where snapper and redfish take over. Hell, I’ve even used tilapia.

But my absolute favorite? Shark. Dogfish and leopard shark are the perfect frying fish, and in fact are traditional with northern English fish and chips. The meat is white as snow, very lean, and firmer even than halibut. And, happily none of these fish are threatened, so you can eat them with a clean conscience.

Bottom line: You want a reasonably thick, firm fish for the best beer battered fish and chips. Avoid soft textured fish like mackerel or bluefish, or really thin fish like flounder; they are best cooked a little differently.

Seafood? You bet. Beer battered shrimp and lobster is amazing. Obviously you can batter clams, as many do, and I suppose you could batter squid, too, although it’s usually just floured and fried.

Best Beer for Fish and Chips

Other than that, the sky’s the limit, although my next favorites after the English ales are German (really American and Mexican) lagers. Avoid a really good pilsner since it too will be hoppy in its own way. Cheap American macro beers are great for beer batter.

And while they have their adherents, “weird” beers like sours or heavy Belgian beers or oddly flavored beers might end up as your favorite, but it won’t please a crowd.

Oh, and what’s with the beer anyway? Beer’s carbonation makes a lighter batter. This is another reason why you want to avoid sours or IPAs, which are not normally heavily carbonated. Lagers are typically the most carbonated beers you will normally buy. 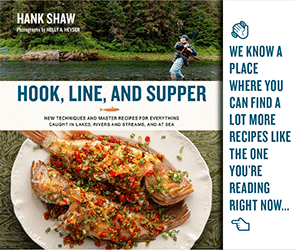 You can absolutely go minimalist and use plain flour for beer battered fish and chips. Many do. But you will get a better batter if you use self-rising flour, or just add a bit of baking powder to your regular flour.

Want to play? Play with the flour. Different flours will give you different results. Most, however, will be heavier than all-purpose flour. I rarely deviate from the ole’ AP flour.

You can add whatever seasonings you want to the flour, but I generally keep things very simple because any spices or whatever you add will be exposed to the raging hot oil and can burn and become bitter. Paprika is especially prone to this.

I don’t cook gluten-free on purpose, but here is a pretty legit gluten-free beer batter for fish if you can’t do flour. Not as good as the real thing, but hey, better than nothing!

We eat beer battered fish and chips because we want that juxtaposition of perfectly cooked, essentially steamed fish, inside a crispy, crispy exterior.

You get that with hot oil. I know this seems obvious, but I need to stress this. People get scared of hot oil, and if you are, beer battered fish and chips are not for you. You need the oil at at least 350°F and really 360°F. Good oils like refined peanut oil, canola, corn oil, grapeseed and avocado can all handle this easily.

Hell, regular vegetable oil will, too, although you will then want to watch that the oil doesn’t climb above 400°F at any moment. Not a problem in most cases.

Yeah, it can be sporty to have a half-gallon of 360°F oil roiling on your stovetop, but so long as you know it’s that hot, you’re fine. Bad things happen when you don’t, and the oil gets too hot. Thermometers are a must.

I like deep fryers because they restrict the amount of vaporized grease that gets into the air. And while that aroma really adds to the ambiance of a place like Pike Street Fish Fry, its not so good in your house. But a heavy Dutch oven will work fine, too. Just keep the oven fan on high.

Oil temperature isn’t the only factor in ultra crispy beer battered fish and chips. How you hold the finished pieces matters a lot, too. Remember me talking about Mom frying fish and stacking them like cordwood? Don’t do that.

(Like this recipe? I have lots of variations on fried fish here, from Chinese salt and pepper fish, to Mexican fried fish, to a simple fried snapper with Saltines.)

Instead, place a cooling rack on a baking sheet in the oven and set it to “warm,” or about 185°F. Set the finished pieces on the rack and they will stay crispy.

Overloaded fryers also cause soggy fish and chips. Place each battered piece in the hot oil separately, and make sure you wait a second — or have enough room — for the batter to set or so that the pieces never touch in the first 30 seconds or so. After that, they can bounce around if they want.

I know, so many words about beer battered fish and chips. But even though this is a simple recipe, it is technique driven, and there is a reason that the best fish and chips places are revered.

Side note: When eaten cold the next day, English fish and chips made with halibut or those little sharks tastes astonishingly like cold fried chicken. Go figure.

A word on the chips: I am not very good at making my own French fries, which require double-frying. Here is a good recipe for the French Fries.

Instead I make my own chips, which I like just as much. Potatoes sliced just thick enough so the center is soft, just thin enough that a quick bath in hot oil will crisp the outsides.

You make these before the fish, actually, because they take longer and hold well in the oven. Pro tip: Use waxy potatoes like Yukon Golds, not russets. The texture is more like a fried potato and less like a store-bought potato chip. 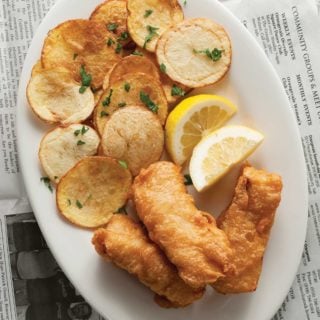 Serve with lemon, beer and a sauce of your choice. Tartar sauce is a good idea, but remoulade is also good, as are aioli and the traditionals -- malt vinegar and Tabasco.

NOTE: You can strain and reuse the frying oil three or four times before discarding.