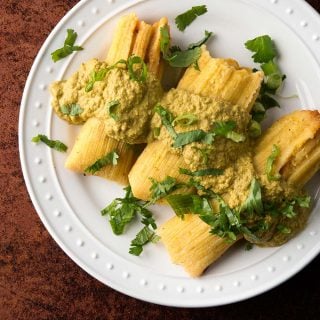 Tamales are, like all good things stuffed into other good things, long labors of love. Especially turkey tamales.

This is not a quick and easy recipe. Turkey tamales require some time in the kitchen. I make no apologies for that. But the result of your efforts are light, lovely packets of goodness that are a joy to eat and make use of two classic fall ingredients: pumpkins and turkey.

Both, you should know, originate in Mesoamerica. Yep. Both the Mayans and Aztecs domesticated the turkey, as well as the various winter squash we all know and love. While not entirely pre-Contact, this recipe for turkey tamales is pretty close: Only a few spices, the lard and garlic were brought to Mexico by the Spaniards.

If you’ve somehow never eaten a tamal, which is what a single dumpling in a batch of tamales is called, they are ideally light packets of corn dough — the masa — filled with something good. In this case shredded turkey leg and thigh meat, coated in a red chile sauce. They are then steamed in corn husks or banana leaves or somesuch, unwrapped and eaten, sometimes with a sauce, and sometimes not.

I happen to love pipian sauces, which are made primarily from pepitas, which are the green centers of pumpkin seeds. You can often find them in the health food section of your supermarket, in convenience stores as a snack, or in any Latin market pretty much anywhere.

If you can’t find pepitas, you can use regular pumpkin seeds roasted, but be sure to grind them well, as they include a thin shell we normally eat. Sesame seeds are another authentic variation.

And if you don’t feel like making the pipian, no biggie. Turkey tamales are fine without them. Or you can use a different sauce. My tomatillo salsa verde is another good option.

Since these require a bit of work, you can be more efficient by doubling this recipe. Most Mexican families that make tamales do it in an industrial scale — after all, making 75 tamales isn’t that much harder than making 25. Why bother? Tamales freeze really well.

Premade turkey tamales reheated (even microwaved!) then become fast food for busy nights. What’s not to love about that? And if you like these tamales, try my recipe for venison tamales. 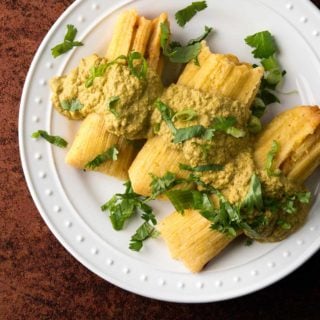 Clearly this is something you will want to make on a weekend. Making tamales is not quick and easy, although it isn't rocket science, either. A few tricks: The filling can be made several days in advance. The pipian sauce can also be made a day or two ahead, but not much more. Once made, the tamales store in the fridge for a week or so, and freeze well. To reheat refrigerated tamales, bring them out about 30 minutes before you eat them, and heat up a comal or skillet. Toast the tamales in their husks until the husks get mostly charred, then serve. This is arguably tastier than eating the tamales fresh. For frozen tamales, put them in a steamer frozen, and steam for about 20 minutes or so.
Prep Time1 hr 30 mins
Cook Time1 hr
Total Time2 hrs 30 mins
Course: Main Course
Cuisine: Mexican
Servings: 25 tamales
Calories: 153kcal
Author: Hank Shaw

No turkey? Use any white meat. Pheasant, rabbit, pork or chicken are all good. Don't have the exact chiles? No biggie. Any combination of ancho, New Mexican or guajillo are fine. And needless to say it doesn't have to be a pumpkin in the masa dough; any winter squash (except spaghetti squash) works fine. When looking for lard, you want the refrigerated stuff. If you don't see it at a Latin market, ask. Ditto for masa. Many Mexican markets will have freshly made masa in the back, and are happy to sell it to you.