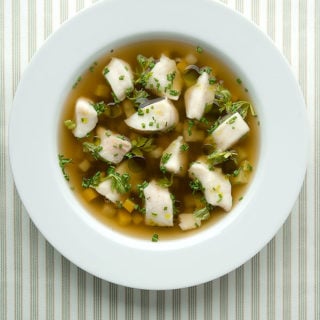 I have a thing for the North. I love the foods up there, the cold winters that require such resourcefulness. This pike soup is firmly in that tradition, a Germanic-Scandinavian style soup that uses a lot of ingredients from where I got this Northern pike, Manitoba, Canada.

I’ve written about the fantastic fishing trip I took to Manitoba earlier this year, and the first thing I made from that fish I brought home was classic pickled pike, which was perfect for our hot summers here in California.

Now that autumn is here, I can do more with this fish, which, to me, is a cold-weather food. Pike and tomatoes is certainly great, but I just associated northerns with cold weather. Probably it’s because I used to catch them through the ice in Minnesota.

Readers of this space know my mantra when designing new recipes is that if it lived together, it will go together on the plate. As the great Chef Marco Pierre White said, “Mother Nature is the true artist, and the chef is merely the technician.” In that vein, last year I created a dish I called Walleye Minot, using all sorts of ingredients I found around me in North Dakota when I was fishing for da walleye hey dere…

This dish is inspired by Manitoba. Root vegetables. Wild rice, and a seriously Teutonic clear broth I am really, really proud of. Oh, and when I say wild rice I mean real, honest-to-goodness wild rice, not the cultivated stuff grown here in California, which sucks. This is the stuff you want, and if you live in the North Country you can find it all over the place; I bought some from a gas station in Michigan once. Yes, you can use the store-bought stuff, but it ain’t the same.

Make this soup on a cold day. It’s a refined soup worthy of a main course on a Sunday, or a special occasion. Everything in the bowl plays well with each other, all tied together by a special broth that comes together in less than two hours. If it looks too fancy for you, read the directions below — I give you all sorts of possible shortcuts, which you can use and still make a kick-ass pike soup. But do me a favor? Make it as I suggest just once. It’s worth it.

This is a weekend or date night soup, something you might see in a fancy restaurant. I make the soup in a very particular way to get it exactly the way I like it. My method keeps the broth clear and has everything cooked perfectly. Do it my way if you want it to look like the pictures.

That said, you can of course make the broth and then put the rice in first, then when it’s almost tender, add the diced root vegetables, then finally the pike and the garnishes. It will still taste great, but the broth will be cloudy.

Or, you can shortcut this even more by skipping the broth-making altogether and using homemade or store-bought chicken broth. The recipe will be different, but still good. 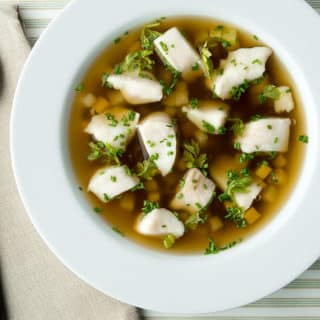 As is always, pike is not the only fish you can use with this soup. Other good options are yellow perch, walleye, smallmouth bass, burbot or codfish, haddock, Pacific rockfish, striped bass, California seabass, redfish, tautog, black seabass... you get the point. For time-saving, you can make the broth up to 3 days ahead of time. Keep the finished broth in the fridge.
Prep Time1 hr 30 mins
Cook Time45 mins
Total Time2 hrs 15 mins
Course: lunch, Main Course, Soup
Cuisine: American
Servings: 8 people
Calories: 343kcal
Author: Hank Shaw