When you decide to make pheasant stew you can go in any number of different directions. But you might as well go classic French and make your pheasant stew a real-deal coq au vin.

Coq au vin simply means “rooster in wine,” and it has historically been made with an old, usually troublesome rooster chicken. And when I say historically I mean it: This recipe has been around since Roman times.

Most people make coq au vin with a store-bought chicken, and this is OK, but nothing like the real dish, which needs an old bird. A stewing hen is a good option for non-hunters, but a pheasant is better. After all, it’s a rooster, a coq.

Yes, you can make this stew all at once, but it’s better if you marinate the bird in de-alcoholized wine for a day or three. What’s that mean? Wine you bring to a simmer, then cool. Why bother? Fully alcoholic wine as a marinade can impart a weird, tinny flavor to the meat. It’s not so huge that you’ll hate your pheasant stew if you don’t do this, but it is noticeable enough to make the extra effort worth it.

What wine? Something you’d drink on a Tuesday, which is to say decent enough to drink, but not that $100 bottle of Châteauneuf du pape you have hidden in the cellar.

What if you don’t have a pheasant? Any white meat works. I’ve use grouse of various species, partridges, rabbits, even quail. Wild turkey would be OK, too, as would the aforementioned stewing hen, which if you’re looking are best bought in Latin markets.

This pheasant stew, unlike some of my other recipes on this site, is easy-peasy to make and needs only your time to be wonderful. Be warned: If you are actually using really old chicken roosters, as I’ve done before, they can take a powerful long time to get tender. I once made this with a five-year-old chicken rooster that took nearly 7 hours to get tender. Your pheasant should take about 3 hours.

And keep in mind this is a hearty stew, where the broth is cooked down to make a sort of hybrid broth/sauce. Serve it in shallow bowls. 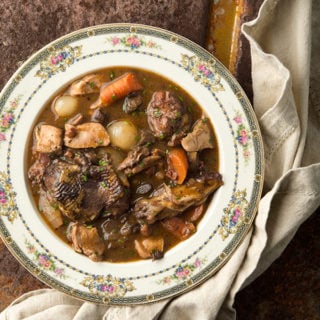